A video of a man being paraded naked by some women is doing rounds on social media with a claim that he is BJP MLA, Anil Upadhyay.

NewsMobile fact-checked the above post and found the claim attached to the picture to be false.

We found a Facebook post with the same video which claimed that the above incident took place in Ambala’s Jain Market where the man was paraded naked after he attempted to rape a five-year-old.

We then ran a search on Google using relevant keywords and found a report by TOI dated Jan 20, 2020, featuring the same video. 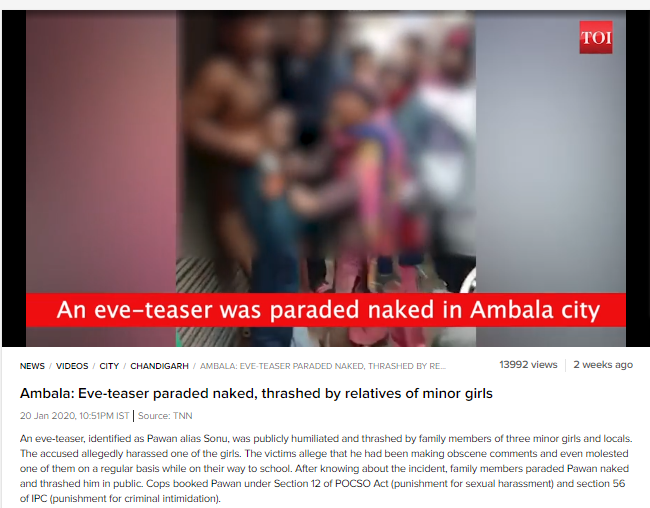 As per the report, ” Pawan alias Sonu, was publicly humiliated and thrashed by family members of three minor girls and locals. The accused allegedly harassed one of the girls. The victims allege that he had been making obscene comments and even molested one of them on a regular basis while on their way to school. After knowing about the incident, family members paraded Pawan naked and thrashed him in public.”

“This matter is from Pammi chowk area. A woman has complained that a man named Pawan has been harassing school girls, behaving in a vulgar manner with them. He also used to flash his private parts, ” an ANI report quoted SHO Women Police Station, Sunita Daka.

The report also mentioned that an FIR has been lodged against the accused and a case has been registered against him under the POCSO Act.

Moreover, previously, NewsMobile has debunked various other Fake news that was also circulating under the name of Anil Upadhyay.

The man in this video is not BJP MLA Anil Upadhyay; here’s the fact check

The above information proves that the man in the viral video is not Anil Upadhyay.