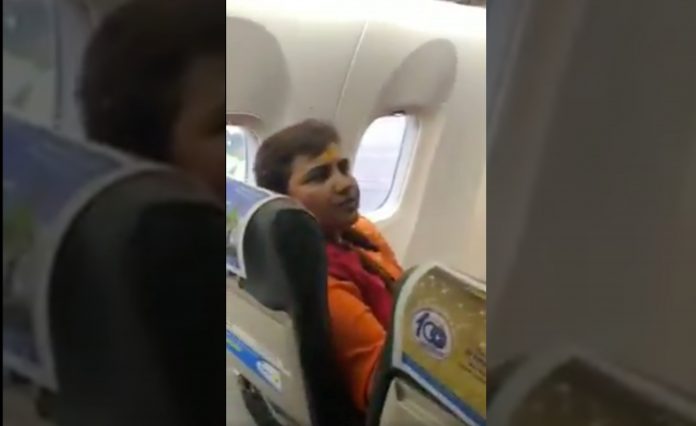 A video of BJP MP from Bhopal, Pragya Thakur has gone viral in which SpiceJet passengers of a Bhopal-bound flight can be seen arguing with Thakur over the seat allotment.

The video was shot on Saturday when Pragya Thakur reportedly caused a delay of Delhi-Bhopal SG2489 flight by about 45-minutes after she was asked by the crew to move to a non-emergency row seat as she was on a wheelchair but she refused.

In the viral video, passengers can be seen confronting Thakur and reminding her that she is people’s representative and her job is not to ‘trouble them’.

As the arguments escalate, Thakur said: “I said it at the beginning itself that show me your rulebook. If I don’t feel comfortable, I will go.”

According to the spokesperson of the airline, a few passengers requested Thakur to change her seat, while some demanded the crew to offload her.

Thakur further argueed why she should go when there is ‘no first class, no facilities’, to which one of the passengers replied saying ‘first-class is not her right’. “You should have the moral compass that even if one person is getting troubled because of you, you should own up because you are the leader. You are not ashamed that you have held 50 people at ransom,” the passenger tells her.

On Sunday, SpiceJet issued a clarification saying Thakur was not allowed to sit on the pre-allotted seat as rules do not allow a ‘passenger on wheelchairs’ to be seated in the emergency row due to safety reasons.

“SpiceJet had the privilege to have Pragya Thakur on board on December 21. She had pre-booked seat 1A and had come to the airport in her own wheelchair. The Delhi-Bhopal flight is operated by Bombardier Q400 aircraft (78 seats). On this aircraft, the first row is the emergency row seat and is not allocated to passengers on wheelchairs,” the statement by SpiceJet read.

“I was travelling on a SpiceJet flight. I have a problem in my spinal cord & was allotted seat 1A which has leg space. I even paid extra for it. I was brought there on a wheelchair,” Pragya Thakur said.

“Some passengers came & asked why is the flight being delayed. People thought I am showing off my VIP status but I was travelling as a normal passenger. I travelled in pain at the back, and later complained to Bhopal Airport Director,” Thakur said.

“I demand that this matter be investigated and action be taken against those responsible for it,” she added.