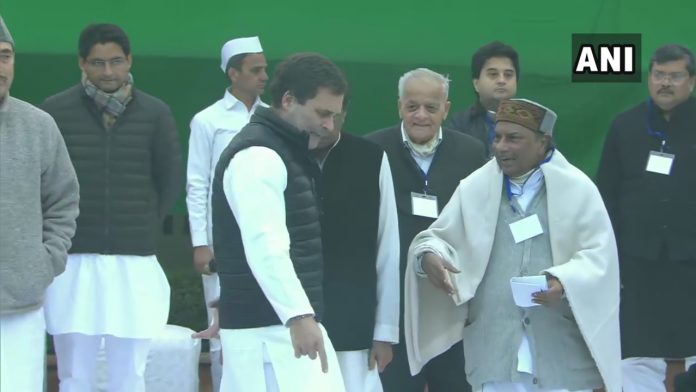 The Congress on Monday staged a ‘dharna’ against the newly-enacted Citizenship Amendment Act (CAA) at Raj Ghat in Delhi, where Congress leader Rahul Gandhi launched fresh attacks on PM Modi.

Earlier in the day, Congress leader Rahul Gandhi gave a clarion call to youth and students to join the party’s sit-in protest against the Citizenship (Amendment) Act and National Register of Citizens (NRC).

It’s not good enough just to feel 🇮🇳. At times like these it’s critical to show that you’re 🇮🇳 & won’t allow 🇮🇳 to be destroyed by hatred.

Join me today at 3 PM at Raj Ghat, to protest against the hate & violence unleashed on India by Modi-Shah.

Protests have been happening across the country over the Citizenship (Amendment) Act, 2019, since it was passed by the Parliament. It seeks to grant citizenship to refugees from Hindu, Christian, Sikh, Buddhist and Parsi communities fleeing religious persecution from Pakistan, Afghanistan, and Bangladesh who entered India on or before 31, 2014.