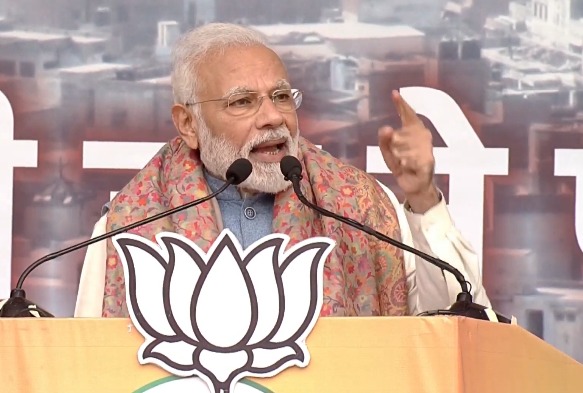 Prime Minister Narendra Modi on Sunday addressed a mega BJP Delhi campaign rally at the Ramlila Maidan which is close to Old Delhi’s Daryaganj where violence had erupted recently against the Citizenship Amendment Act.

BJP organised the rally to thank the Prime Minister for the decision of regularising unauthorised colonies in Delhi.

PM Modi said, “The opposition parties are attempting to fool and divide the people over the Citizenship Amendment Act (CAA) but the attempt will fail as it is based on lies.

“You all have seen how they (opposition) are speaking lies and giving inflammatory speeches along with fake videos being made on the issue. The people sitting at the top have committed a sin by putting these on social media,” Modi said at the Ramlila Maidan.

PM urged the crowd present at the rally to stand and pay respects to the Parliamentarians for passing the CAA.

“The CAA was passed in the Lok and Rajya Sabha for the benefit of the Dalits, poor and the oppressed class. The MPs chosen by you made it possible for the bill to be passed in the Parliament, I urge you to stand up and show respect to the Parliament for it. I too bow down to all the representatives along with you,” he said.

Further slamming the political parties, Modi said that the CAA was passed in the same house which also gave ownership rights and respect to 40 lakh people.

“Some political parties tried to spread different types of rumours after this bill was passed. They are misleading the people, I want to ask these liars whether we (BJP) asked any person’s religion, faith or which party he voted to before giving ownership rights to people living in unauthorised colonies in Delhi? Did we ask for any papers to be submitted for it? Hindus, Muslims, Sikhs and Christians, everyone who lives here was benefitted from the move by the Centre,” he said.

“I want to ask them when we authorised the unauthorised colonies, did we ask anyone about their religion? Did we ask which political party do they support? Did we ask for documents from 1970,1980?” Modi questioned while speaking at the rally.

“The Citizenship Amendment Act is not to take away anyone’s citizenship but it is to give citizenship to people,” PM Modi said.

“Both the bill which gave ownership rights to 40 lakh people in Delhi and the CAA were passed in the same House. They are lying when they say this (CAA) is a law to snatch the rights of the people, this will not last long,” Modi asserted.