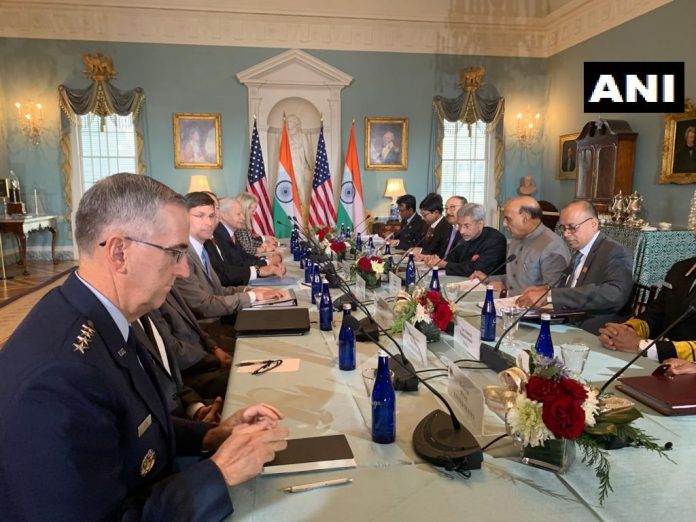 India and the US on Wednesday initiated the second session of the 2+2 Ministerial Dialogue in Washington that would reflect the rapid growth of the vital strategic partnership between the two sides.

The Ministers resolved to work together to realise the full potential of the Indo-US Strategic global partnership.

The Spokesperson of the Ministry of External Affairs Raveesh Kumar clarified that the issues pertaining to the Citizenship (Amendment) Act, 2019 was not a topic of any discussion between the four Ministers.

However, he added that the members of the Senate Committee on Foreign Affairs had been briefed about the legislation by the members and India’s position has been clearly articulated.

The meeting, hosted by the Department of State in DC, will focus on deepening bilateral strategic and defence cooperation, exchanging perspectives on global developments, and the shared leadership between the two countries in the Indo-Pacific region.

Building on the success of the inaugural US-India 2+2 Ministerial Dialogue in 2018, the talk will serve as an important platform for discussing critical diplomatic and security issues and expand cooperation in defence and counter-terrorism measures between the two sides.

Secretary of State Michael Pompeo and Secretary of Defense Mark Esper will host Minister of External Affairs S Jaishankar and Minister of Defence Rajnath Singh for the Dialogue.

The US and India, last month, had held the Tiger Triumph, the first-of-its-kind, tri-service military exercise, which strengthened cooperation between the two armed forces in the areas of humanitarian assistance and disaster relief.

A senior State Department official said that 2+2 will address ways to further accelerate and deepen the cooperation and the two sides will discuss and coordinate on the pressing regional and global challenges of the day.

The official recalled that Pompeo emphasised on his visit to India last summer, the US-India relationship has evolved dramatically from a relationship of great potential to one of great achievement.

“This upcoming meeting underscores the high priority the Trump Administration places on a strong US-India relationship,” he said.

The inaugural India-US 2+2 Ministerial Dialogue was held in New Delhi in September 2018 in the presence of Pompeo and former External Affairs Minister Sushma Swaraj.

The Dialogue was launched as a reflection of the shared commitment by Prime Minister Narendra Modi and US President Donald Trump to provide a positive, forward-looking vision for the India-US strategic partnership and to promote synergy in their diplomatic and security efforts.