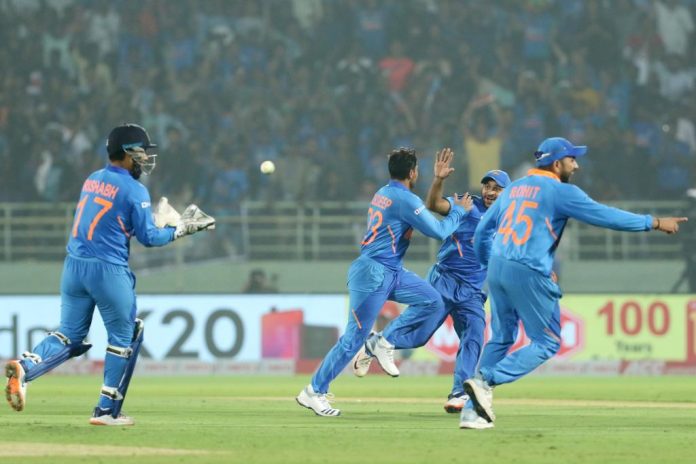 Chasing a mammoth target of 388 runs, West Indies got off to a steady start as openers Shai Hope and Evin Lewis put up an opening partnership of 61 runs. India finally got the breakthrough in the 11th over as Shardul Thakur dismissed Lewis (30). Twelve runs later, Shreyas Iyer’s brilliance on the field, led to Shimron Hetmyer’s (4) run-out, reducing West Indies to 73/2.

Next, Ravindra Jadeja got his name among the wicket-taking charts as he clean bowled Roston Chase (4) in the 16th over, reducing Windies to 86/3. Nicholas Pooran and Shai Hope then retrieved the innings for Windies as the duo put on 106 runs for the fourth wicket. Mohammed Shami finally provided the breakthrough for India as he dismissed Pooran (75) in the 30th over.

After Pooran’s dismissal, Windies lost four wickets in quick succession and were further reduced to 210/8. En route, Kuldeep Yadav also managed to take a hat-trick. As a result, he became the first Indian to take two hat-tricks in international cricket.

Soon after Windies innings folded for 280 and India managed to win the match by 107 runs. Earlier, Rohit Sharma and KL Rahul’s knocks of 159 and 102 respectively enabled India to post a score of 387/5 in the allotted fifty overs.

After being put in to bat, openers Rohit and Rahul provided the best possible start for the side as the duo put on 227 runs for the first wicket.

ALSO READ: UP: All schools ordered shut for two days due to cold wave

Their partnership saw both batsmen bringing up their respective centuries. West Indies finally got the breakthrough in the 37th over as Alzarri Joseph dismissed Rahul (102). Silencing the crowds, Windies skipper Kieron Pollard sent back Virat Kohli (0) as the Indian captain was dismissed for a first-ball duck, reducing India to 232/2.

Rohit kept on going on his merry way and he brought up his 150 plus score. However, Sheldon Cottrell was finally able to send the right-handed Rohit (159) back to the pavilion in the 44th over. Then, Rishabh Pant joined Iyer joined in the middle and the duo put on 73 runs for the fourth wicket. Their partnership also saw both batsmen scoring 31 runs off a single over.

Pant (39) failed to register a fifty-plus score while Iyer (53) was dismissed immediately after reaching the half-century mark. In the end, Kedar Jadhav and Ravindra Jadeja took India’s score past the 385-run mark.