Following the brutal Hyderabad veterinary surgeon’s rape and murder case which shook the country, a picture collage of Bollywood actress Swara Bhaskar and Kareena Kapoor has surfaced on the internet in which the two actors can be seen holding a placard. 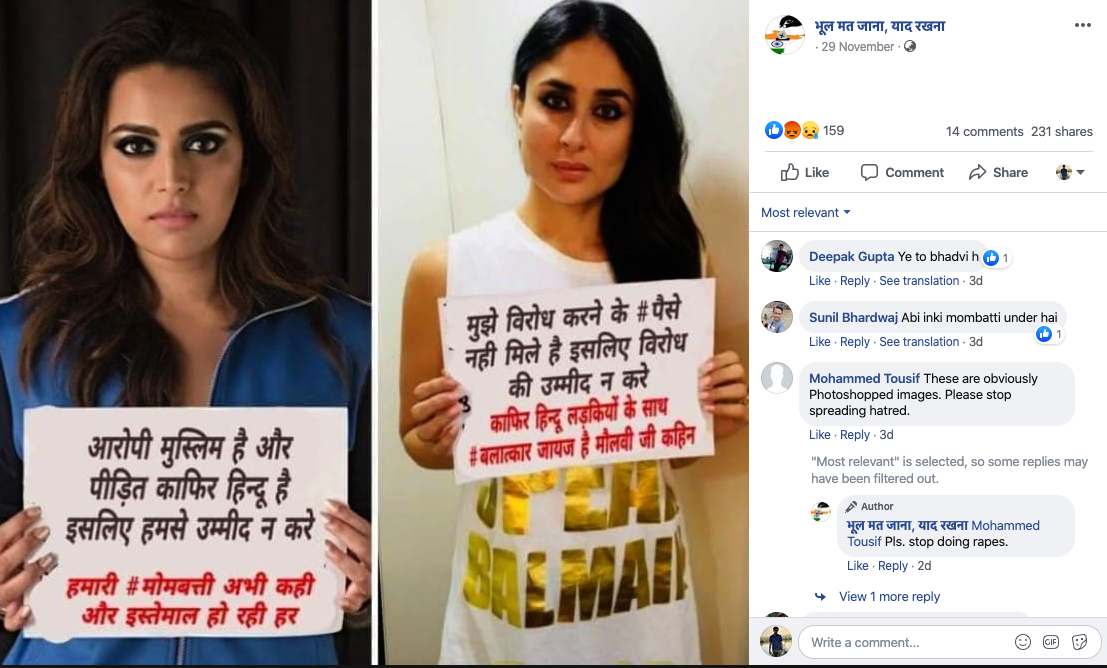 (Translation: “The accused is Muslim and the victim is Hindu, so do not expect from us”)

(Translation: I have not got the money to protest, so do not expect protest. Maulvi ji said Rape of Hindu girls is justified”)

NewsMobile fact-checked the above post we found it to be FAKE.

On cropping and putting both the pictures through a simple Reverse Image Search saperately and we found the original pictures, and placard in which read something else.

We found Swara Bhaskar’s original picture on her verified Instagram in which she was showing her outrage against the infamous Kathua rape incident.

I am Hindustan. I am Ashamed. #JusticeForOurChild #JusticeForAasifa 8 years old. Gangraped. Murdered. In ‘Devi’-sthaan temple. #Kathua and lest we forget #unnao Shame on us! #BreakTheSilence #EndTheComplicity #ActNow

The original picture of Kareena Kapoor was tweeted by Swara Bhasar on her verified (@ReallySwara) Twitter handle on April 14th, 2018. In the placard, Kareena was also expressing her outrage against the infamous Kathua rape incident.

In conclusion, the pictures of both actresses are over a year old and they have been manipulated using Photoshop software to create a false narrative.