Home Home Slider No question of alliance with Shiv Sena, will sit in opposition: Sharad... 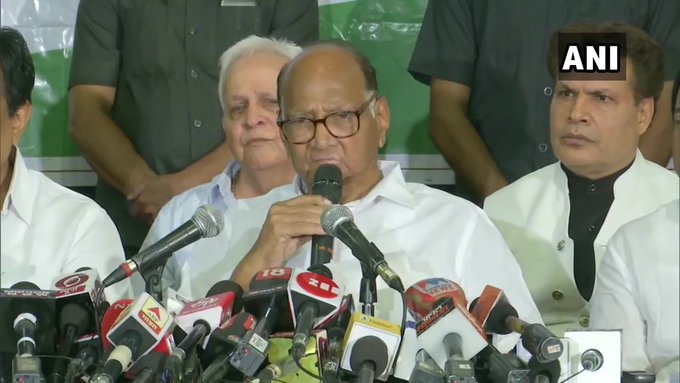 Reiterating his stance that Nationalist Congress Party (NCP) has numbers only to sit in Opposition, party Chief Sharad Pawar on Wednesday denied the possibility of forging an alliance with Shiv Sena to form the government.

He said that BJP and Shiv Sena have got the mandate and they should form the government.

“I do not have anything to say yet. BJP and Shiv Sena have got the mandate of people, so they should form the government as soon as possible. Our mandate is to play the role of Opposition,” said Sharad Pawar while addressing a press conference Mumbai.

“Where is the question of a Shiv Sena-NCP government? They (BJP-Shiv Sena) are together for the last 25 years, today or tomorrow they will come together again,” said Pawar.

He also stated that there is only one option, which is that the BJP and Shiv Sena should form the government.

“There is no other option other than this to avoid President’s rule,” he outlined.

Further lamenting on the plight of farmers in State he said: “Centre should help farmers whose crops have been damaged due to rains. I visited affected areas and feel that farmers must be provided relief. Another issue is of insurance companies not paying farmers for crop damage, the Finance Ministry should intervene in this matter.”

On Wednesday morning, Shiv Sena leader Sanjay Raut had met Pawar at his residence elaborating on which Pawar said that it was regarding the upcoming session.

“Sanjay Raut met me today and discussed the upcoming parliament session. There are some issues we discussed on which we can have a similar stand,” said Pawar.

As the deadline for government formation in Maharashtra is fast approaching, Shiv-Sena is not ready to settle for any anything less than an equal share of power as Sanjay Raut on Wednesday outrightly denied the possibility of reaching any new settlement with BJP except the one he claims was allegedly agreed upon prior to polls.

The BJP emerged as the single largest party by winning 105 seats while Shiv Sena got 56 in the 288-member state assembly. The results of assembly polls were announced on October 24.