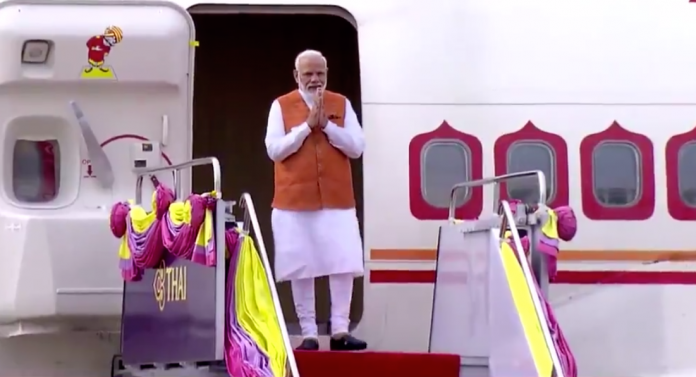 Prime Minister Narendra Modi arrived in Bangkok for a three-day visit to Thailand on Saturday. He is slated to participate in the Association of Southeast Asian Nations (ASEAN), East Asia, and Regional Comprehensive Economic Partnership (RCEP) summits during his official visit.

Apart from attending the meetings, he is scheduled to address the ‘Sawasdee PM Modi’ community programme in Bangkok at 6 PM (IST) on Saturday. He will also release a commemorative coin marking the 550th birth anniversary of Guru Nanak Dev, as well as the release of a Thai translation of Tamil classic Tirukkural, according to the Ministry of External Affairs (MEA).

On November 3, Modi will co-chair the 16th ASEAN-India summit with Thailand Prime Minister Prayut Chan-o-cha, on whose invitation he is visiting the country. The meeting will take stock of the progress made in the relationship between India and the ASEAN member countries. Several Indian initiatives are currently implemented in this regard, such as New Delhi’s commitment to offering 1,000 PhD scholarships to ASEAN students at the IITs.

On the following day, the Prime Minister will attend a special lunch hosted by the Thai Prime Minister for the leaders of the East Asian countries participating in the summit. The leaders on this platform will exchange views on progressing the global sustainable development agenda.

Later in the day, the Prime Minister will take part in the 14th East Asia summit. The agenda of the meet would be to review the future direction of East Asia cooperation and exchange views on regional and international issues. The member countries participating in the summit account for 54 per cent of the world’s population and 58% of the world’s GDP.

Subsequently, Modi will take part in the RCEP summit, where the leaders of the member countries will review the state of negotiations which are ongoing in Bangkok currently and will continue over the next few days.

On the sidelines of the three summits, the Prime Minister will also hold several bilaterals. He will return to New Delhi on the evening of November 4.

Ahead of the visit, the Indian Ambassador to Thailand Suchitra Durai said that New Delhi is keen to have a strong and unified ASEAN playing a central role in the emerging dynamic of the Indo-Pacific region.

“The ASEAN-India summit which will take place on November 3, will provide us the opportunity to take stock of the relationship and also to decide on the future areas of cooperation,” she told ANI on Friday.

“The Prime Minister is leading the Indian delegation to 16th ASEAN-India summit in Thailand. ASEAN for us is a very important grouping. India would like to have strong and unified ASEAN playing a central role in the emerging dynamic of the Indo-Pacific region,” the envoy added.