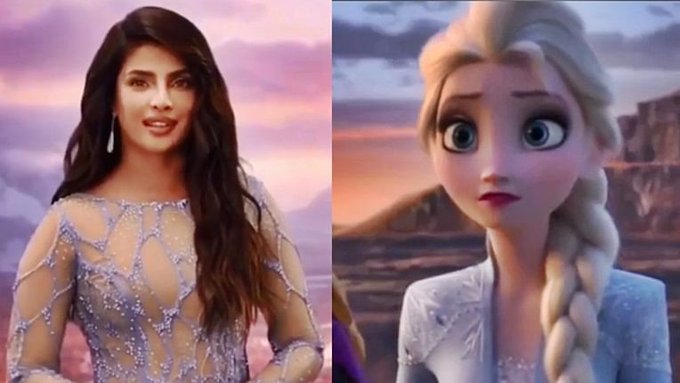 The audience has been eagerly waiting to hear the Chopra sisters in ‘Frozen 2’ and Priyanka Chopra finally shared a clip to calm the curious fans from her upcoming outing!

To take the excitement a level higher, the clip, which starts with Priyanka’s ‘Daddy’s lil girl’ tattoo, features the ‘Mary Kom’ star not only voicing the elder sister Elsa’s character in the film but she also dressed like her.

Signaling how the film is dedicated to all the independent women, the actor is seen delivering dialogues like, “We don’t need a King to become a Queen.”

The magical, enchanting snippet showed Elsa and Anna taking on a difficult journey in the “new age story of Frozen 2”.

‘Frozen 2’, the sequel to the Oscar-winning 2013 film ‘Frozen’ will see Priyanka and Parineeti together for the first time professionally for the Hindi version.

Produced by Disney, ‘Frozen 2’ is all set to hit theatres on November 22.

On the work front, Priyanka was last seen in ‘The Sky is Pink’ opposite Farhan Akhtar who played her on-screen husband and Zaira Wasim, who essayed the role of her daughter.

The film opened in theatres on October 11.