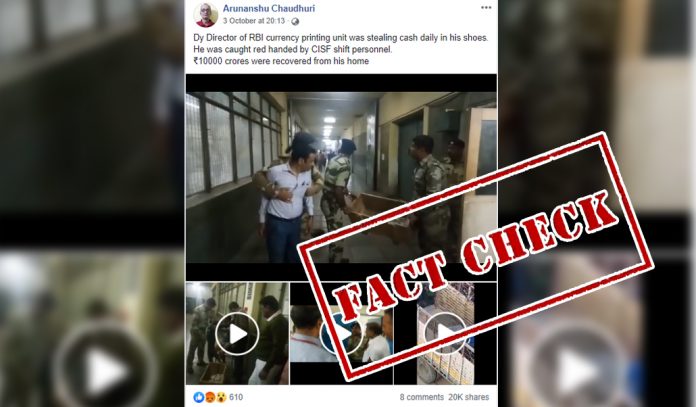 A set of videos is being shared online with a claim that the Central Industrial Security Force (CISF) arrested the Deputy Director of RBI for stealing cash. According to the claim, Rs 10,000 crores were recovered from his house.

“Dy Director of RBI currency printing unit was stealing cash daily in his shoes.
He was caught red-handed by CISF shift personnel.
₹10000 crores were recovered from his home” the caption read.

When NewsMobile fact-checked the video, we found the claim to be misleading.

The article identified the man as Manohar Verma, the Deputy Control Officer of Bank Note Press (BNP), Dewas, Madhya Pradesh. It is a unit of the Security Printing and Minting Corporation of India Ltd.

According to an India Today article, that also features the viral video, Verma was caught with Rs 4 lakh cash hidden in his shoes. The article also states that a total of Rs 90.59 lakh was recovered from him, Rs 26 lakh from his office and Rs 64.5 lakh from his residence.

We also found a tweet by the official account of CISF confirming that they caught an official of Bank Note Press.

RBI also issued a notice dated Jan 20, 2018, clarifying that the official apprehended by CISF was not an RBI employee.

The above information proves that the official in the viral video is not an RBI employee and hence the caption is misleading.