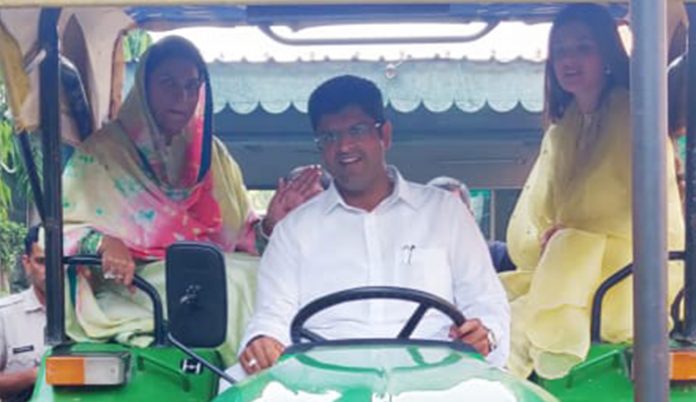 Jannayak Janata Party (JJP) leader Dushyant Chautala and his family arrived on a tractor to cast their votes at a polling booth in Sirsa for the Haryana Assembly elections.

“I hope every citizen will vote to give a new direction to Haryana, which will strengthen the farmers of the state. If the (BJP) wave is there, then why Prime Minister had to come for five times and their national president (Amit Shah) had to cancel his rallies. In Haryana, the key issues are unemployment, security, right price for farmer’s production, among others,” Dushyant said here.

JJP was formed in 2018 after splitting from the Indian National Lok Dal (INLD).

Meanwhile, INLD leader Abhay Singh Chautala, who is contesting from Ellenabad seat, told media, “BJP will be out of government after today evening. INLD will play a major role in the new government. Without us, the government can’t be formed in the state.”

Polling for 90 seats of Haryana and 288 constituencies of Maharashtra began at 7 am and will continue till 6 pm in the evening.

The electoral fate of over 4400 candidates- 1169 in Haryana and 3237 in Maharashtra – will be sealed in EVMs by the voters who will exercise their democratic franchise in the assembly elections.

In Haryana, 19,578 polling stations have been set up whereas there are 96,661 polling booths in Maharashtra for citizens to cast their votes.