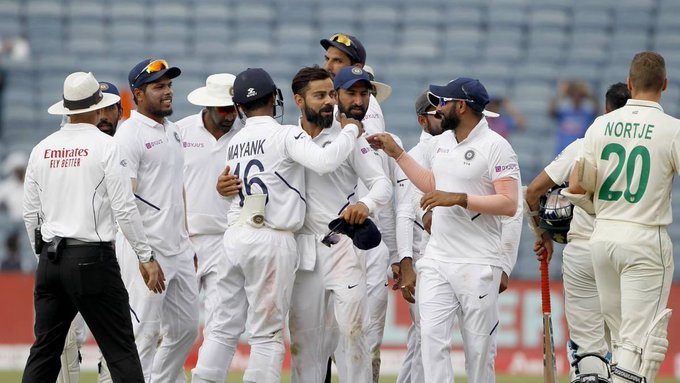 India defeated South Africa by 137 runs and an innings in the second Test match at Maharashtra Cricket Association Stadium in Pune on Sunday.

This is India’s 11th consecutive victory on home soil, the highest by any team. With this victory, India also took a 2-0 lead over South Africa in the three-match Test series.

India was on 601/5 when they declared their first innings. 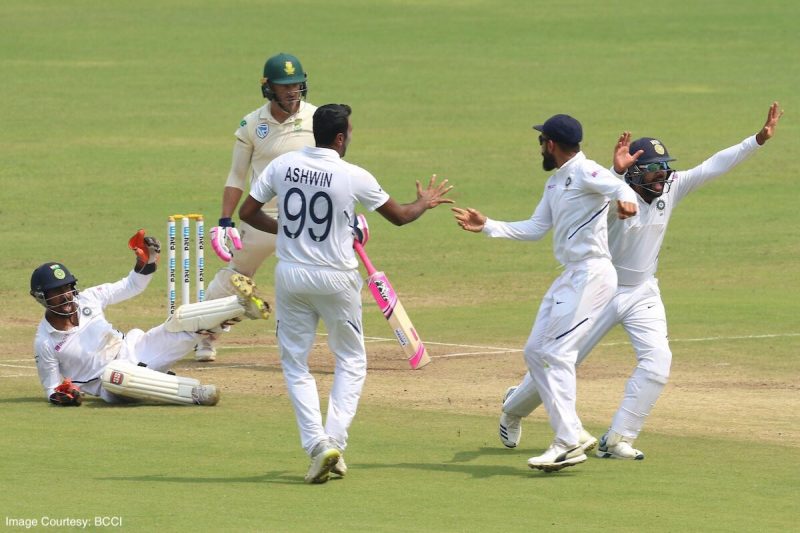 South Africa had a poor start in their second innings as Aiden Markram was given LBW on the second delivery of the day, bowled by Ishant Sharma.

Dean Elgar was then joined by Theunis de Bruyn on the field but could not form a good partnership as he was caught behind in Umesh Yadav’s over. The skipper Faf du Plessis then came to bat and played steadily along with Elgar.

Both formed a 49-run partnership before Ravichandran Ashwin got hold of Du Plessis (5). In his next over, Ashwin removed Elgar as well as he gave away an easy catch to Umesh Yadav after scoring 48 runs.

Temba Bavuma and Quinton de Kock were the next batsmen but the latter was bowled by Ravindra Jadeja, putting the host under immense pressure. Senuran Muthusamy then took the field.

Both the player played slowly and avoided any risky shots. They added another 46 runs on the board. However, their partnership was broken after Jadeja sent Bavuma (38) back to the pavilion in the 44th over.

In the next over, Mohammad Shami dismissed Muthusamy (9). Keshav Maharaj and Vernon Philander were the next batsmen. The duo had accumulated a 109-run partnership in the first innings to help South Africa end their innings on 275 runs.

Both played cautiously in the second innings as well and formed a 56-run partnership. However, Umesh Yadav came out furiously in the 67th over and took two wickets. First, Philander was caught behind and then Kagiso Rabada was caught by Rohit Sharma.

In the next over, Maharaj was given LBW off Jadeja’s delivery and the visitors’ second innings was ended on 189 runs by the Indian bowlers.