Home NM FACT CHECKER The man in this video is not BJP MLA Anil Upadhyay; here’s... 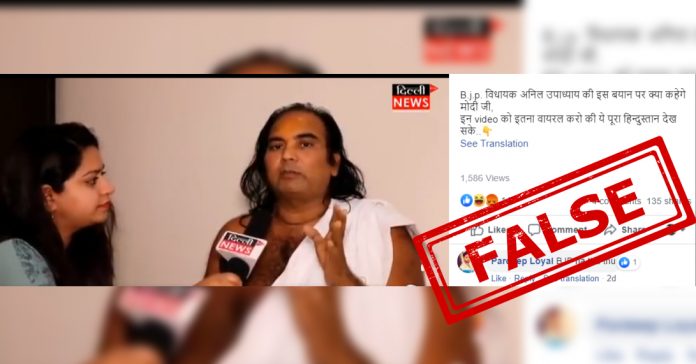 A video is doing rounds on social media in which a man can be seen making statements against Prime Minister Modi.

In the video, he alleges that members of Madhya Pradesh BJP are associated with terrorists and planned Pulwama attack. He also alleges that Prime Minister Modi, BJP spokesperson Sambit Patra, and BJP President are the reason behind all the communal violence and riots in the country.

In the video, we can see ‘Dilli News’ written on the top right corner. So, we decided to go through their YouTube page.

We then ran a search on Sant Yuvraj, we found more interviews of him where he claimed that PM Modi is conspiring to get him killed.

We also found a video uploaded by Hindu sena Hindu army sant Yuvraj uploaded in 2018 where he introduced himself as Sant Yuvraj.

The above information proves that he is Sant Yuvraj and not a BJP MLA.