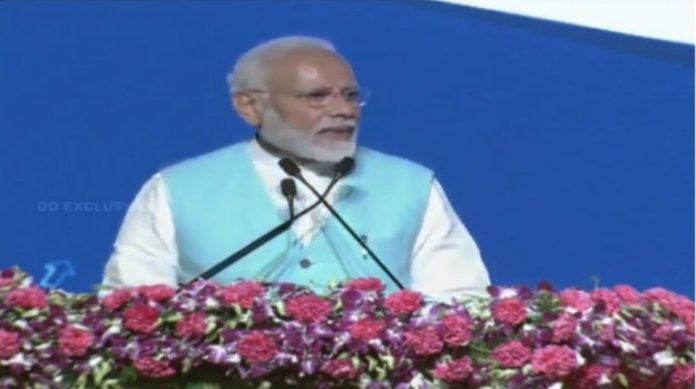 India and Singapore have moved from competition to collaboration, Prime Minister Narendra Modi said at Singapore-India Hackathon at IIT-Madras on Monday.

“Last year during my visit to Singapore, I was told that the focus of the hackathon was competition. This year, the emphasis is on collaboration and complementing each other’s efforts. So it can be safely said that we have moved from competition to collaboration,” Prime Minister Modi said.

The event, an initiative of Prime Minister Narendra Modi, is the first of its kind joint international hackathon between India and any other country. The 36-hour long event, which started on Saturday will conclude today.

The hackathon had 20 teams of three university students each from India and Singapore for exchange of culture and ideas.

ALSO READ: People from outside come to Delhi to avail costly medical treatments…

Calling the idea a grand success, the Prime Minister said that such events bring together government departments, industry people and all premier institutes like the Indian Space Research Organistaion (ISRO).

He also cited various programmes implemented by the central government such as Atal Innovation Mission, which promote innovation and entrepreneurship across the country.

The Prime Minister said India is encouraging innovation and incubation for two big reasons — one for easy solutions to solve India’s problems to make life easier and another to find solutions for the whole world.

He asserted that India’s goal is to make “Indian solutions for global application”.

Prime Minister Modi further said that his government will propose a similar hackathon to those Asian countries, which are keen to participate to offer innovative solutions for reducing ‘global warming and climate change’.

Impressed with projects developed by the students during hackathon, the Prime Minister said he particularly liked the system that detects the person paying attention.

“I will talk to my Speaker in the Parliament. I am sure it will be very useful to Parliament”, he said.

Congratulating the Singapore Education Minister, organisers and students associated with the hackathon, he said, “today’s hackathon is the start-up idea for tomorrow”.

Later, the Prime Minister visited the campus and reviewed the innovations and technology developed by the studnets.