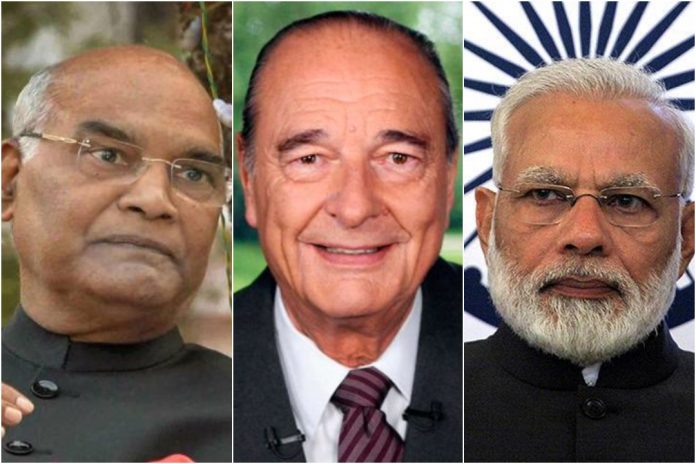 President Ram Nath Kovind and Prime Minister Narendra Modi on Friday condoled the demise of former French president Jacques Chirac, who passed away at the age of 86, after a long illness.

Kovind described Chirac as a “great friend of India” and a “tall leader”.

“Saddened by the passing of Jacques Chirac, former President of France. A tall leader and a statesman, he was a great friend of India. My sincere condolences to the French people in this hour of grief #PresidentKovind,” Kovind’s tweet read in the President of India’s handle.

On the other hand, Modi said that Chirac played a decisive role in establishing and building a strategic partnership between the two countries.

“My deepest condolences on passing away of Jacques Chirac. India mourns the loss of a true global statesman. A friend of India, he played a decisive role in establishing and building India-France Strategic Partnership,” he said in a tweet.

The 86-year-old former leader was most remembered for his defiant stand against the United States-led war in Iraq, and for shortening the presidential term from seven to five years in a referendum in 2000.

In recent years, Chirac had suffered from memory loss and was rarely seen in public. In years since the end of his political career, he was dogged by charges of corruption dating back to his time as the Paris mayor.

Chirac remained one of the most popular public figures in France.