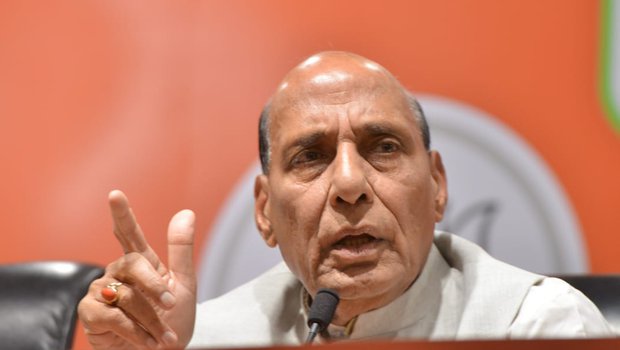 New Delhi: Defence Minister Rajnath Singh has said the government was committed to work towards achieving a $26 billion defence industry by 2025 and the target was to achieve exports of USD 5 billion in the next five years.

Addressing the second annual session of Society of Indian Defence Manufacturers here on Tuesday, he said the defence sector has been identified as one of the most prominent sectors under “Make in India” initiative to realize $5 trillion economy by 2024.

Underlining the need to reduce dependency on arms imports, the minister said several steps have been taken under the “Make in India” initiative to make the country a major defence manufacturing hub and a net defence exporter. The government would not hesitate to initiate more measures if required, he added.

According to a Defence Ministry release, the minister said that the Defence Production Policy reflects the resolve of the government to achieve $26 billion defence industry with an anticipated investment of $10 billion in aerospace and defence goods and services by 2025.

This will also provide employment to about 2-3 million people.

He said the government has introduced many far-reaching reforms in the past five-and-a-half years to create an ecosystem where private and public sectors contribute together according to their respective strength and experience.

The reforms have touched almost all aspects of defence production and procurement, he noted.

The minister said that simplification of procedures for defence exports has resulted in the export of Rs 10,745 crore in 2018-19, which is nearly seven times the export achieved in 2016-17 and a target of USD 5 billion for exports has been set till 2024.

Describing India as a big defence industrial base, the minister said there are nine Defence Public Sector Units, 41 ordinance factories, 50 dedicated Research and development labs and many other establishments were included in it.

There are about 70 licence holding private companies.

He said defence offset policy has been streamlined and government-owned trial and testing facilities have been provided to the private sector. Two Defence industrial corridors have been launched in Tamil Nadu and Uttar Pradesh.

Speaking on the government’s initiatives to promote start-ups and micro, small and medium enterprises, he said at present over 8000 MSMEs were engaged in defence production.

Under the “Make” procedure, till date 40 industry development proposals have been given in-principle approval.

Eight such projects would have an estimated value of Rs 2,000 crore in the next five years. As against 215 defence licences issued till 2014, the number of such licences issued went up to 440 by March 2019, he added.

Singh said Defence Procurement Procedure was revised in 2016 to stimulate the growth of domestic defence industry.

He said in recent times most of the capital procurement approvals by the Defence Acquisition Council were given under indigenous development and production.

The minister said that the strategic partnership model has been introduced in the Defence Procurement Procedure to ensure that private sector manufactures big-ticket items like fighter aircraft, helicopters, submarines and armoured vehicles. “This will help Indian private companies to evolve into global giants in coming years,” he said.