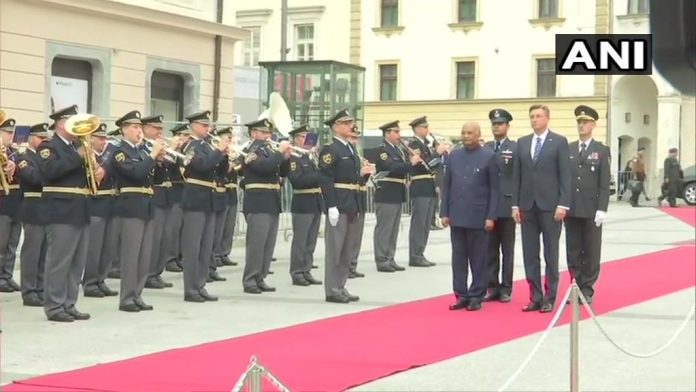 President Ram Nath Kovind arrived in Slovenia on Monday following the successful conclusion of his visit to Switzerland.

Slovenia: President Ram Nath Kovind receives ceremonial welcome in Ljubljana. This is the first ever presidential visit from India to Slovenia. pic.twitter.com/gQDTmqDO6K

This is the first ever visit by any Indian President to Slovenia after it gained Independence in 1991.

During the final leg of his European tour, Kovind will hold wide-ranging discussions with his Slovenian counterpart Borut Pahor and National Assembly president, Dejan Zidan, and take part in a India-Slovenia business event.

The President’s departure from Switzerland to Slovenia was delayed for about three hours on Sunday after his Air India One faced a technical glitch at the Zurich airport.

The President drove to the airport but was asked to return to his hotel after a ‘Rudder Fault’ was detected in the aircraft.

During this time, an Air India Boeing 777 that was to operate on London-Mumbai sector, was kept on standby at Heathrow as an alternate aircraft to be flown to Zurich for the President’s journey if need be, sources in the airline said.

Albeit, the Air India One was rectified by AI engineers, and it flew Kovind to Slovenia following a delay of three hours.