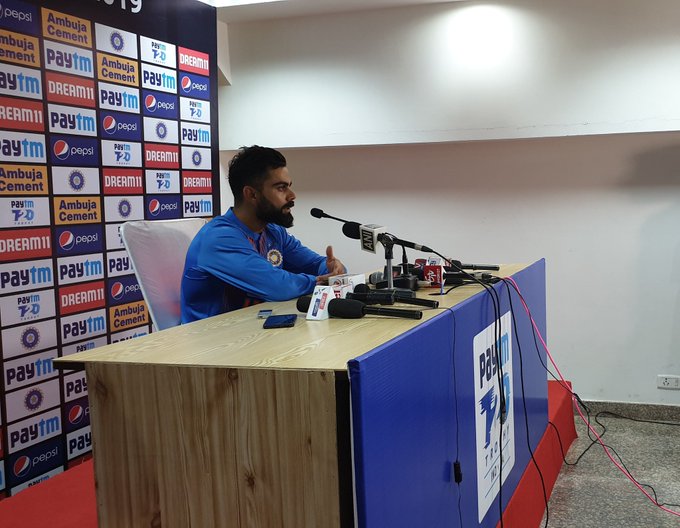 As India and South Africa get ready to face each other in the first T20I of the three-match series, skipper Virat Kohli lauded wicket-keeper batsman, MS Dhoni, saying ‘he always thinks about Indian cricket and there is no replacement for experience’.

Dhoni is not a part of the team squad for the three-match series against South Africa. The wicket-keeper was criticised during the World Cup for batting with a slow strike-rate.

“We want to win every game we play” – @imVkohli #TeamIndia #INDvSA pic.twitter.com/mnisZm8K5Z

“Experience is always going to matter whether you like it or not. Many players have proven in the past that age is just a number and even Dhoni has done that a lot in his career. One thing great about him is that he thinks for Indian cricket. When to stop playing cricket, is completely an individual decision. No one should give opinions regarding the matter,” Kohli told reporters.

Earlier this week, Kohli had posted a picture with Dhoni on social media. The skipper remembered 2016 T20 World Cup match against Australia and said that Dhoni made him run like crazy in the match.

A game I can never forget. Special night. This man, made me run like in a fitness test 😄 @msdhoni 🇮🇳 pic.twitter.com/pzkr5zn4pG

However, after the post, netizens were quick to draw conclusions and Dhoni’s retirement rumours flooded the internet. However, later, Dhoni’s wife Sakshi cleared the air, saying “it’s just rumours”.

“I did not have anything on my mind, I was just sitting at my home and I just uploaded the picture. It became news, it is a lesson for me about what I think about myself, the world does not necessarily see it that way. That game is very special, I have not openly talked about it so that is why I uploaded the picture but people took it otherwise,” Kohli said.

The 30-year-old also got a pavilion named after him at the Arun Jaitley Stadium. In a star-studded ceremony, Feroz Shah Kotla Stadium was named after late finance minister and senior BJP leader Arun Jaitley.

“Initially it was hard to believe. It is a very gracious gesture. You do not think about that as a cricketer, but for someone to give you that honour, it feels special,” Kohli stated.

Thank you @delhi_cricket and @BCCI for bestowing this honour upon me. The pavilion will remind me of my journey in life and in cricket but most importantly I hope it will serve as an inspiration for the next generation of young cricketers of our nation.

Talking about the upcoming series, Kohli said the side wanted to give opportunities to guys who have been performing well in the domestic circuit for the past two to three years.

He also said that the team has the roadmap for the T20 World Cup in Australia next year.

“We wanted to give opportunities to players who have done well for the past two years in the domestic circuit and T20 cricket in the IPL. It is about finding the best possible balance we can for the side and not necessarily stick to one particular type of balance. If other teams can bat till number nine, so why cannot we? Whatever decisions are made, they are made looking at the future,” Kohli added.

“The first two to three T20I series will help us assess every situation. Definitely the roadmap for T20 World Cup in 2020 is on our mind. It is an exciting prospect looking at the new bunch of guys in our lineup,” he further said.

ALSO READ: Virat Kohli thanks DDCA, BCCI for dedicating a stand to him at Arun Jaitley…

The Men in Blue are coming off a winning run in the limited-overs format as they defeated Windies in both T20I and ODI series.

India defeated Windies 3-0 in the T20Is whereas they outclassed the team from the Caribbean 2-0 in ODI series.

The first T20I will be played tomorrow, September 15th, at Dharamshala. The Net practice session for India, however was cancelled due to rain in Dharamshala.