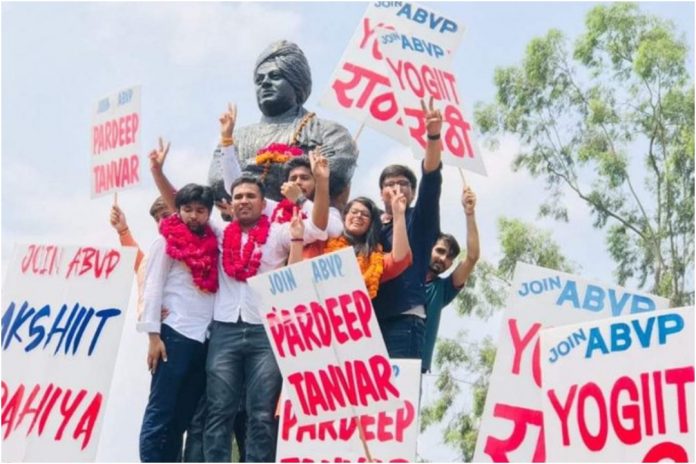 Celebrations broke out outside the counting centre in Kingsway Camp with supporters dancing to ‘dhol’ beats and rose petals being showered on the winners.

We have done it, yet again!

We thank the students of Delhi University for reaffirming their faith in our leadership & choosing #ABVP4DUSU.

ABVP’s Ashwit Dahiya defeated NSUI candidate Chetna Tyagi for the top post by a margin of over 19,000 votes. Pradeep Tanwar and Shivangi Kharwal, both from the ABVP, secured the maximum number of votes for the posts of president, vice-president, and joint secretary, respectively. The lone winner from NSUI was Aakash Choudhary, who managed to trump his opponent for the post of DUSU secretary.

After a delay of almost one hours, the counting of votes for the Delhi University Student Union (DUSU) election began from 8:30 AM on Friday. The election for student body representatives was held across 52 polling stations set up in various colleges and faculty departments.

According to DU Chief Election Officer Ashok Prasad, votes were counted at the Community Hall of the Police Lines in northwest Delhi`s Kingsway Camp.