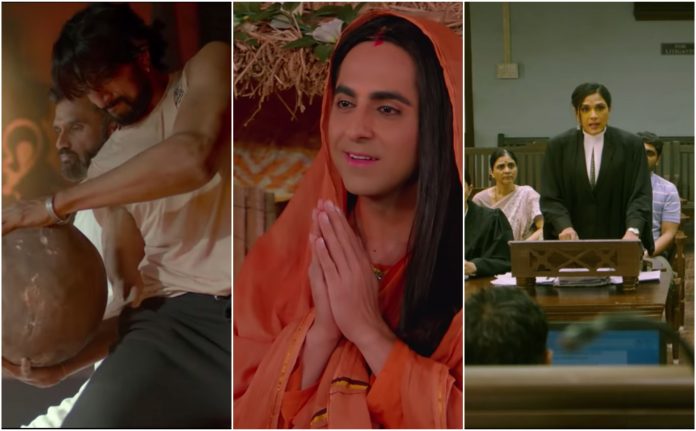 The audience this Friday get served a diverse variety that includes a rib-tickling comedy, a hard-hitting thriller and a sports/ action drama.

This Ayushmaan starrer is a comedy of errors wherein everyone around falls in love with ‘Pooja’ who seems to have become everyone ‘s dream girl, actually being impersonated by Ayushmaan.

Having a perfect comic cast of Vijay Raaz, Annu Kapoor, Rajesh Sharma, Manjot Singh and Nushrat Barucha, the film is directed by Raaj Shandilya (Indian television writer who has written 500 plus scripts for Kapil Sharma, Krishna Abhishek and Sudesh Lehri).

The entire team including writer-director and the cast, all seem to have a superb record at handling humour and the trailer absolutely reconfirms the very fact.

Ayushmaan who is currently high on success, fan following and critical acclaim seems to be all set to wow the audience yet another time.

ALSO READ: PeeCee, Farhan, Zaira will take you on a magic ride in…

On the other end of the spectrum is this hard-hitting thriller which revolves around a rape case and the plot once again rakes up the issue of will and consent. It’s a courtroom drama that is bound to start a conversation about the probity of law and justice.

The film stars Richa Chaddha and Akshay Khanna as warring lawyers and along with them, Rahul Bhatt, Kumud Mishra, Atul Kulkarni amongst others.

The film is directed by Ajay Bahl and written by Manish Gupta who has helmed many RGV scripts like Sarkar, D and James.

The talented cast and the writer have a proven record of intense roles and gripping scripts. The trailers look promising and the subject is definitely hard-hitting.

To ensure no genre is left out, the third film releasing this week is “ Pailwaan” starring Sudeep Kichha (the Makhhi star) and Sunil Shetty.

The story revolves around a rebel wrestler (Kicchha) who fights his way up inspite of oppression and his mentor and coach ( Sunil). The movie promises lots of action and desi wrestling. The film directed by S Krishna is being simultaneously released in three-languages.