Sikh man stabbed to death in the US; Sikh community in fear of hate crime | Newsmobile
Wednesday, December 7, 2022

A 64-year old Sikh man, who was out for his evening walk, was stabbed to death by unidentified assailant(s) in the US on Monday.

The police have not made any arrests or have got any evidence in the case. They have asked the community to help identify a man captured on video hopping a fence and running away from the park around the time when the incident took place. 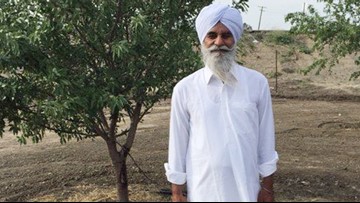 According to reports, the incident took place at Gretchen Talley Park in Tracy, California. Identified as Mr. Parmjit Singh, he died soon after from the gruesome injuries. Detectives say a passer-by spotted the man bleeding on the ground and immediately called 911.
Police have launched a homicide investigation.

Tracy Police Spokesperson Lt Trevin Freitas has said, “We just need to figure out who that is, why they were in the area, what they may have seen and potentially any of their involvement in the incident.”

“We can’t say what it was right now. We’re keeping all possibilities open. We have no information that would lead us to the motive of this crime. It is something that we can’t disprove at this time and we’re actively investigating all possibilities,” Freitas said.

Singh is survived by two kids and three grandchildren.

Tracy Mayor Robert Rickman in a statement said, “We take pride in our safe, close-knit community. The loss of one of our own to violence has shaken us to our core and is felt by the entire community. On behalf of the Tracy City Council, we offer our sincerest condolences to Mr Singh’s family, friends and to the members of our Sikh community. This violence will not be tolerated and we are dedicating every available resource to ensuring that the person(s) responsible for the death of Mr Singh is brought to justice.”

In an emergency meeting on Monday, the mayor and police chief had a meeting with the Sikh community to calm fears and answer their questions.
The community is offering a USD 1000 reward for identifying the suspect.