A picture post is being shared on social media with a claim that a 70-year-old woman who gets a pension of Rs 1200 per month had to pay Rs 88 and then Rs 29 as a penalty for not having a minimum balance of Rs 2000 in her State Bank of India account. 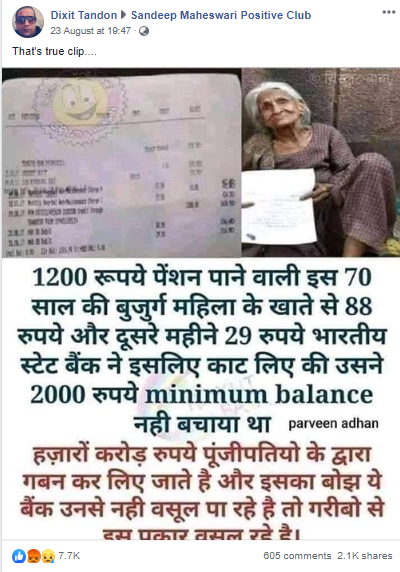 At the time of filing the report, the above post had around 2000 shares.

When we fact-checked the post, we found it to be misleading.

When we cropped the picture of the lady and put it through Google Reverse Image Search, we found that her name is Sumitra, who made headlines in 2017.

An article published by IndiaTimes on March 31, 2017, states that Sumitra (80) and her daughter threaten to commit suicide after RBI officials refused to exchange their old notes worth Rs 41,500.

Along with this, they also exempted minors, pensioners, etc, from the requirement of minimum balance in a savings account.

However, NewsMobile was unable to independently verify the story of a 70-year-old woman who had to pay the penalty for not maintaining the minimum balance since all accounts of the same could only be found on different Facebook pages with a picture of passbook and no details as to who the woman was.

The above information proves that the post is misleading.