A 9-year-old video blaming the Canadian Govt for denying visas to military personnel has resurfaced on the internet and is being shared with the claim that it is a recent report in wake of the Indian govt’s decision to scrap Article 370 that gave special status to Jammu and Kashmir.

”Indo-Canadian ties have hit an all time row, Canada has hurled the ultimate insult on India’s men in uniform, no less than two retired Lt gen,three brigades and two senior officials of the Intelligence Bureau have been denied visa on the grounds that the organizations were engaged in violence,” news anchor said in the bulletin.

🇨🇦 Canada refuses visa for Indian Army Generals and Brigadiers who served as intelligence officers for their part in #Kashmir: thank you @JustinTrudeau for your brave stance pic.twitter.com/KaCwdsz7jy 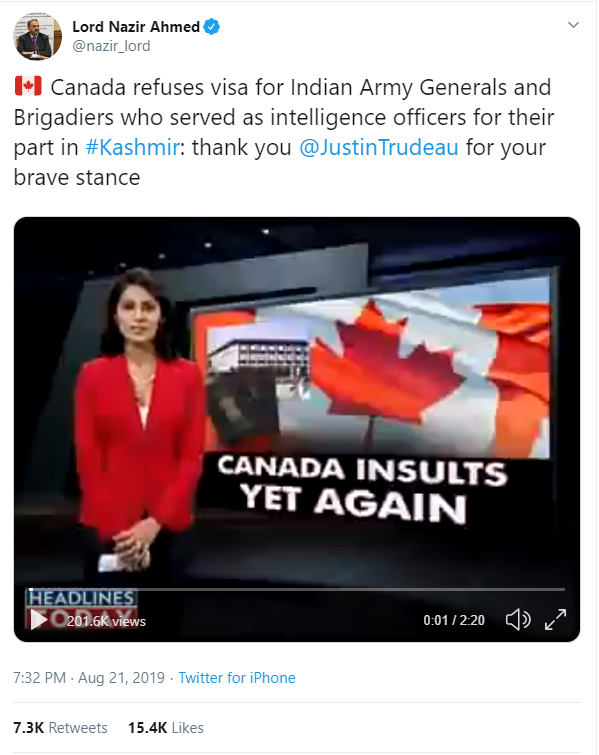 Retired Indian generals denied visas by Canada – accused of working for a “terrorist organisation” that tramples on human rights pic.twitter.com/JUImdkSfGF

When NewsMobile fact-checked the above post, we found the video to be OLD and the news report is from 2010.

We put the keywords like–‘Canada’, ‘Indian army officer’, ‘denied visas’ & searched for news reports and found that the news cited in the video was from May 2010, when Canada had denied visas to army officials.

”Canada denied visas to a member of the Armed Forces Tribunal, three serving Brigadiers, a retired Lt General and a former senior IB official on the grounds that their organisations have been engaging in violence,” Hindustan Times reported on May 27, 2010.

We also found a video on NewsX that dates 27 May 2010. The video reports the same case.

Hence, this proves that the above viral post is misleading.