‘No first use’ nuke policy will depend on ‘circumstances’ in future: Rajnath Singh | Newsmobile
Monday, June 27, 2022

Home Home Slider ‘No first use’ nuke policy will depend on ‘circumstances’ in future: Rajnath... 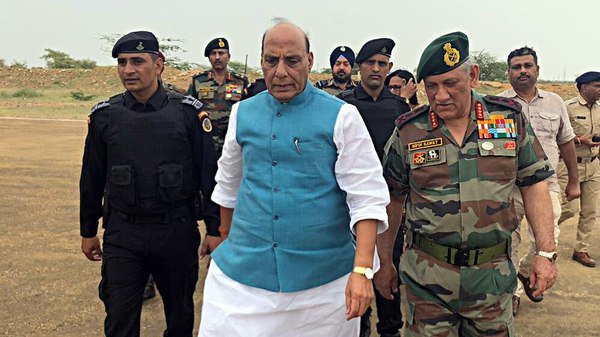 Defence Minister Rajnath Singh on Friday said that India follows ‘no first use’ policy regarding nuclear weapons but said what would happen in future will depend on ‘circumstances’.

#WATCH: Defence Minister Rajnath Singh says in Pokhran, "Till today, our nuclear policy is 'No First Use'. What happens in the future depends on the circumstances." pic.twitter.com/fXKsesHA6A

“On the question of nuclear policy, till today, we have a policy of no-first-use. What happens in future, will depend on circumstances,” he told ANI after paying homage to late prime minister Atal Bihari Vajpayee at the site where the country conducted its second nuclear tests during the regime of the NDA government in 1998.

Pokhran is the area which witnessed Atal Ji’s firm resolve to make India a nuclear power and yet remain firmly committed to the doctrine of ‘No First Use’. India has strictly adhered to this doctrine. What happens in future depends on the circumstances.

“In Pokhran, India emerged as a nuclear power. Despite all restraints, Atal ji gave permission for the nuclear test. India was listed among those countries which have nuclear power. I paid homage to Atal ji on his first death anniversary here,” Singh said.

The nuclear test was conducted in May 1998 in Pokhran during the Vajpayee government. After India acquired the nuclear power, it adopted a nuclear doctrine, which declared a ‘no first use’ (NFU) policy, which means the country will not use its nuclear weapon as a means of warfare unless attacked by an adversary using nuclear weapons.