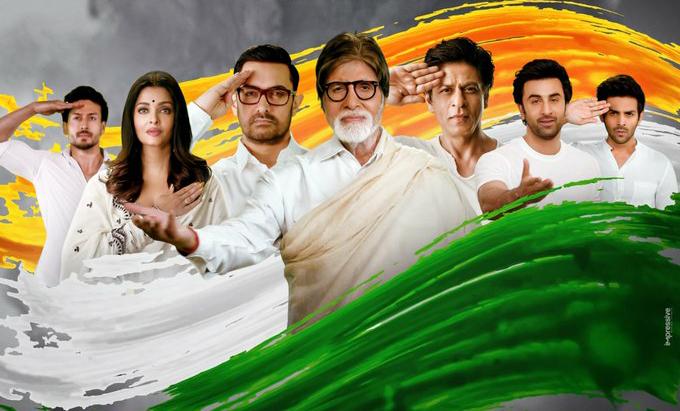 Ahead of Independence Day, which is to be celebrated on Thursday, Central Reserve Police Force (CRPF) unveiled the poster of the tribute song ‘Tu Desh Mera’ which features Bollywood celebrities paying tribute to the Pulwama bravehearts.

The killing of CRPF personnel in the Pulwama terror attack left the entire nation in a state of shock. Around forty soldiers were killed on February 14 after a suicide bomber rammed a car laden with explosives into a CRPF convoy in Awantipora area of Pulwama in Kashmir.

The upcoming song is crooned by Javed Ali, Jubin Nautiyal, and Kabir Singh. The tune is composed by Meet Bros and lyrics have been penned by Kumar.

Standing amidst the tricolour of our national flag, the stars can be seen expressing their feelings towards the real heroes of our nation.

Previously, CPRF which collaborated with ‘HAPPY PROD INDIA’ for the song had unveiled behind-the-scenes pictures of the actors while they were shooting for the music video and thanked them for the support.

The launch date of the song is yet to be announced but the teaser of the song will reportedly be out tomorrow.

ALSO READ: Bollywood songs that will evoke patriotism in you this Independence Day

The ghastly terror attack that claimed the lives of 40 jawans in Pulwama is not something that the nation would forget in a long time. The death of the jawans had sparked several protests and tribute marches all over the country.

Bollywood also observed a black day on February 17, in order to pay tribute to those killed in action. No work was done between 2 pm and 4 pm on that day. A prayer session was also held for the brave hearts.

Kangana Ranaut cancelled the success party of her film ‘Manikarnika: The Queen of Jhansi’. Shabana Azmi and Javed Akhtar put down the invitation sent by Karachi Art Council for a program on poet Kaifi Azmi in Pakistan.