Audience set to be treated to a Bollywood Bonanza this Independence Day! | Newsmobile
Monday, October 3, 2022

Home Music & Entertainment Bollywood Audience set to be treated to a Bollywood Bonanza this Independence Day! 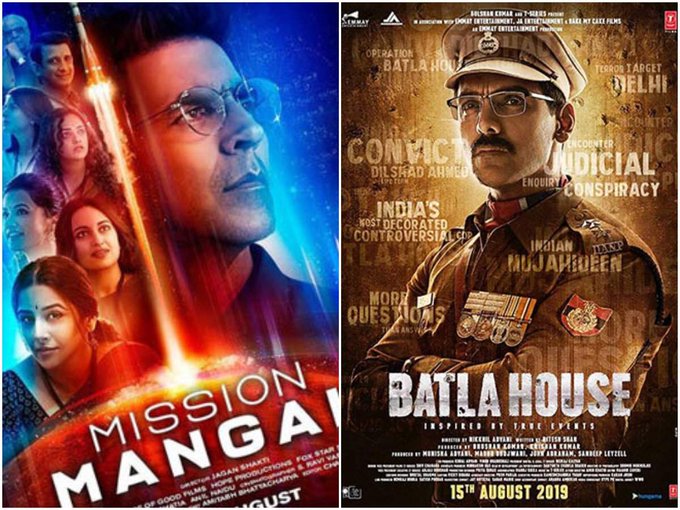 Both the movies have garnered quite some interest with their trailers and pre-release promotions and are all set to encash the nationalist mood and season.

This action thriller is a co-production by T-Series and John Abraham. It is based on the real life encounter in Jamia Nagar in 2008. John Abraham plays a real life cop Sanjeev Kumar.

The film has been directed by Nikhil Advani, who is famous for his movie ‘Kal Ho Na Ho’ and numerous other good movies like ‘Salaam-e Ishq’, ‘Patiala House’, and ‘D-Day’ among others.

It has been written by one of the most successful writers in the industry today, Ritesh Shah, who has to his credit acclaimed films like ‘Kahaani’, ‘Pink’, ‘Airlift’ and many others.

In the politically charged environment in the country these days, the real life story seems to be creating a lot of curiosity.

The crisp and thrilling trailer, high on adrenaline, seems to have made a mark on the audience.

This action thriller is all set to get a great opening.

Produced by Fox Star Studios, this film is loosely based on the story of scientists at ISRO who contributed to the Mars Orbiter Mission, India’s first interplanetary expedition.

While the trailer does not seem too impacting, there are many aspects in favour of the film.

The real life success story of our Mars Mission with the right intent of bringing to fore, the achievements of our very own ISRO team who made this mission a success with their indigenous solutions and low cost ideas definitely strikes a chord.

Also, fresh in mind is the success of our Chandrayan 2 . Audience are bound to be curious.
The fan following of the huge star cast and the bankability of their performances is also a point quite on the movie ‘s side.

What remains to be seen is how have the makers dealt with the highly technical core of the story while balancing the ease of understanding and connection to the masses.