Pakistani minister, Ali Haider Zaidi, tweeted a video on Friday in which a huge gathering can be seen. In the caption, the minister claimed that millions of Kashmiri were holding a rally in Kashmir against the government’s move of scrapping Article 370.

Millions of #Kashmiri rally in IOK against @narendramodi Govt repealing of 35-A. #SaveKashmirFromModi pic.twitter.com/xoHYwSUYaw 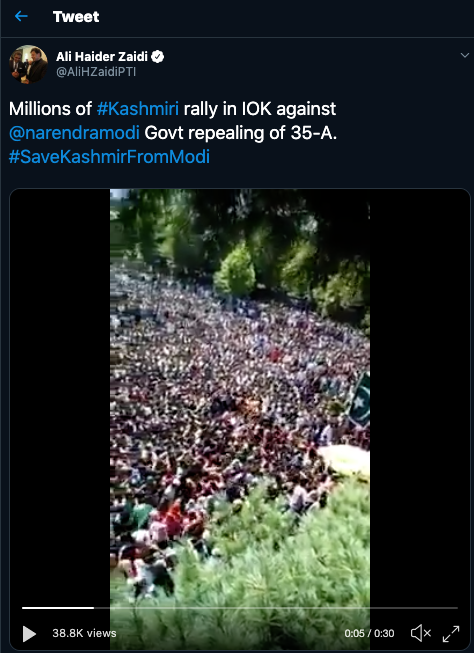 At the time of filing this report, the video was retweeted by over 1,700 Twitter users.

When NewsMobile fact-checked the above tweet, we found that the claim attached to the video is FAKE.

Since Section 144 has been imposed in Jammu and Kashmir since Monday (August 5th 2019) when Article 370 was scrapped.

Therefore, a huge gathering as shown in the video cannot take place since section 144 states–”there shall be no movement of public & all educational institutions shall also remain closed”.

Jammu & Kashmir Government: Restrictions imposed under section 144 CrPC in district Srinagar with effect from midnight 5th August (Monday) which shall remain in force till further orders. There shall be no movement of public & all educational institutions shall also remain closed pic.twitter.com/B1tX8KHoWz

Though the origin of the video is yet to be known, it is clear that no such protest took place in Jammu and Kashmir since the scrapping of Article 370.