Home Politics 32 bills passed in the most productive Rajya Sabha session in 17... 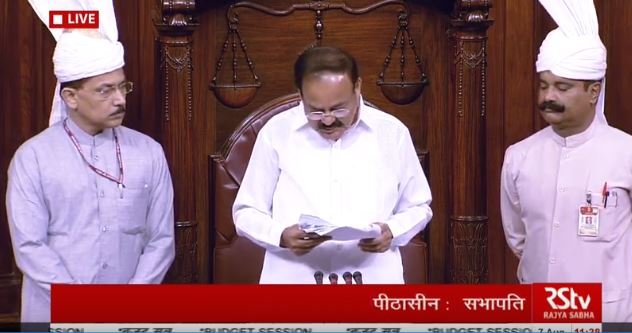 The Rajya Sabha was adjourned sine die on Wednesday after witnessing a record business during the session with the Upper House passing 32 bills against in Lok Sabha.

Rajya Sabha Chairman M Venkaiah Naidu, in his valedictory address, hailed the cooperation between the treasury and the opposition benches and said negative coverage of the proceedings has almost vanished for the time being.

“The disruption has reduced substantially. Let us not return to disruption. The people have to see what functional Parliament means. Members can now go with a smile on their face”, he said.

Naidu stated that the House passed 32 bills including the bills like Triple Talaq and the ones related to Jammu and Kashmir as against 35 in the Lok Sabha, terming it the best session in 17 years.

“32 bills were passed in 35 sittings. This session is the best in the last 17 years.”, he said in his valedictory speech.

He congratulated Deputy Chairman Harivansh and the panel of Vice-Chairmen, the Secretary General, and the staff for successful conduct of proceedings.