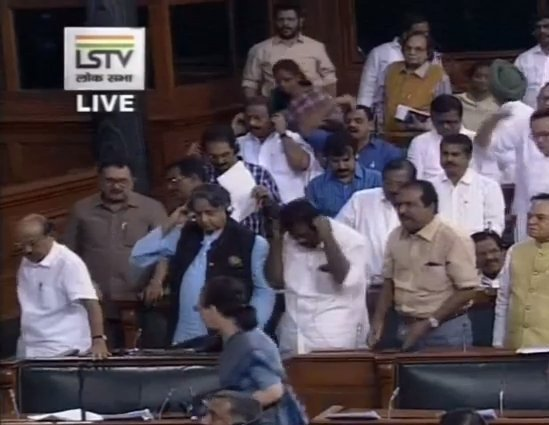 The opposition MPs on Wednesday again raked up US President Donald Trump’s statement on Kashmir in the Lok Sabha and sought a reply from Prime Minister Narendra Modi in the Parliament on the issue. The lower house also witnessed ruckus on the issue.

Congress and other opposition leaders demanded that Modi must make a statement and they were not satisfied with the Externa Affairs Minister S Jaishankar’s statement on the issue.

“We want to hear the facts from the horse’s mouth. What is wrong in this demand. We want that the prime minister should come and give a statement,” Congress leader Adhir Ranjan Chowdhury said.

Earlier in the day in Lok Sabha, Defence Minister Rajnath Singh, talking on the issue, said, “As S Jaishankar ji (External Affairs Minister) said Kashmir issue was not discussed in President Trump & PM Modi meeting. There is no question of mediation in Kashmir issue as it will be against the Shimla agreement.”

“What the foreign minister said is authentic because he was present when Trump and PM Modi held discussions in Osaka and he has put out the statement on record. We feel there is no further statement required by anyone on this,” he added.

Earlier on Tuesday, External Affairs Minister S Jaishankar told the Rajya Sabha that PM Modi has not made any request to Trump regarding mediation with Pakistan on the Kashmir issue.

Trump triggered a political storm on Monday during a meeting with Pakistan Prime Minister Imran Khan by claiming that PM Modi requested him to meditate on the long-pending Kashmir issue.