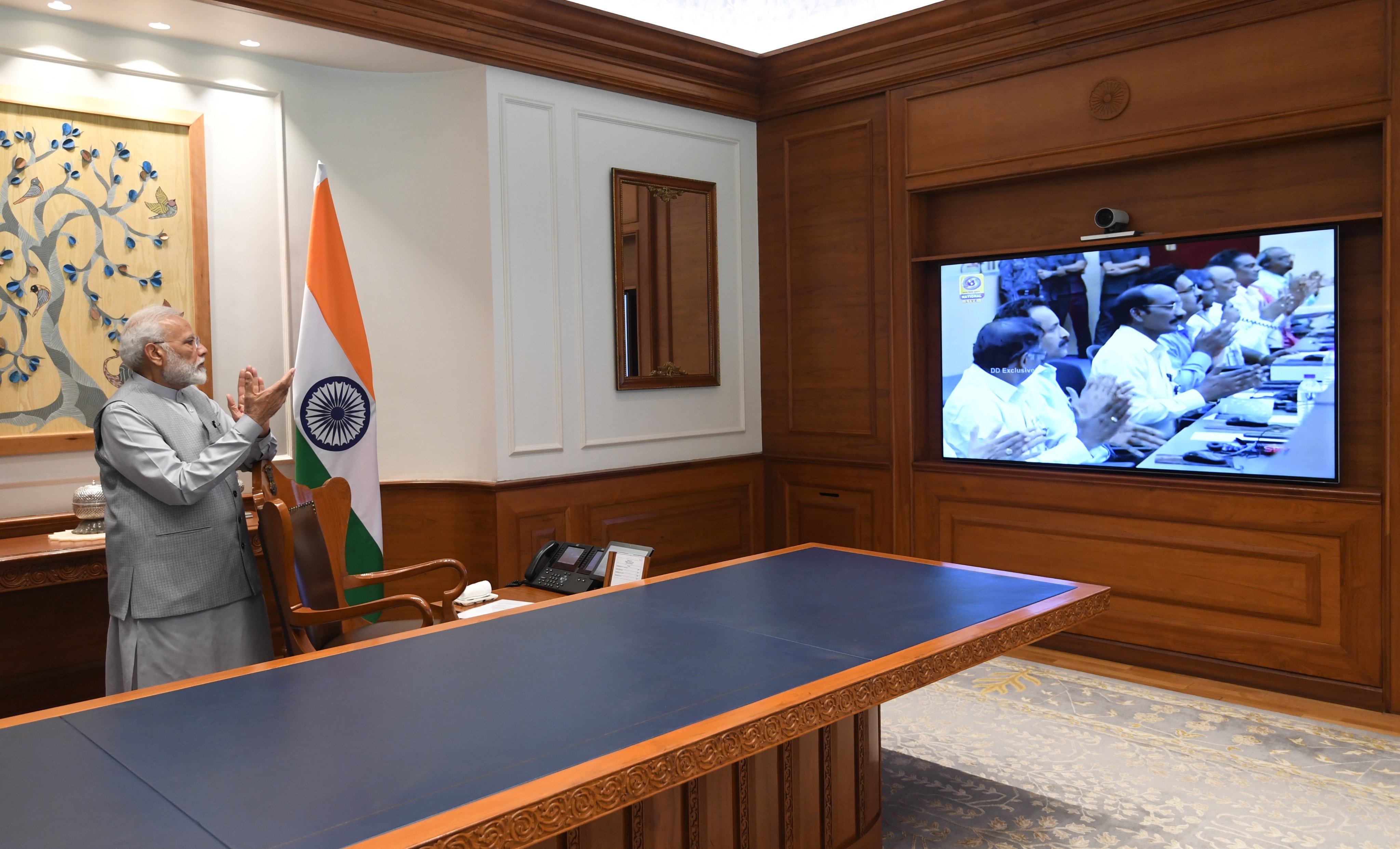 India scripted history with the launch of its indigenous moon mission Chandrayaan 2 and the nation couldn’t have been prouder.

Chandrayaan 2 was launched on Monday at 2.43 pm from the Satish Dhawan Space Centre at Sriharikota in Nellore district of Andhra Pradesh. It was launched atop a Geosynchronous Satellite Launch Vehicle (GSLV) MkIII, India’s most powerful rocket and will carry an orbiter, a lander called Vikram and a rover called Pragyan, which has been almost entirely designed and made in India.

Congratulatory messages to ISRO and the scientists behind the mission poured in from all across the nation.

PM Modi extended his proud congratulations through a series of tweets where he stated that ‘The launch of #Chandrayaan2 illustrates the prowess of our scientists and the determination of 130 crore Indians to scale new frontiers of science.’

Special moments that will be etched in the annals of our glorious history!

The launch of #Chandrayaan2 illustrates the prowess of our scientists and the determination of 130 crore Indians to scale new frontiers of science.

Indian at heart, Indian in spirit!

What would make every Indian overjoyed is the fact that #Chandrayaan2 is a fully indigenous mission.

It will have an Orbiter for remote sensing the Moon and also a Lander-Rover module for analysis of lunar surface.

#Chandrayaan2 is unique because it will explore and perform studies on the south pole region of lunar terrain which is not explored and sampled by any past mission.

This mission will offer new knowledge about the Moon.

Efforts such as #Chandrayaan2 will further encourage our bright youngsters towards science, top quality research and innovation.

Thanks to Chandrayaan, India’s Lunar Programme will get a substantial boost. Our existing knowledge of the Moon will be significantly enhanced.

PM Modi can be seen cheering with pride with the lift off of Chandryaan 2.

Heartiest congratulations to Team ISRO on the successful launch of Chandrayaan-2 from the Sriharikota Range(SHAR), in Andhra Pradesh today. I convey my best wishes for the successful culmination of the mission@isro #GSLVMkIII#Chandrayaan2#ISRO#ISROMissions pic.twitter.com/7RazbsqiAT

Successful landing of Chandrayaan-2, an indigenously developed Spacecraft launched by India’s most powerful rocket- GSLV MKIII on the moon in a few weeks will make India the 4th country to do so. #GSLVMKIII #ISRO #ISROMissions#Chandrayaan2

President Ram Nath Kovind congratulated the scientists at the ISRO and said that “The historic launch of #Chandrayaan2 from Sriharikota is a proud moment for all Indians. ”

#Chandrayaan2 will be the first spacecraft to land close to the moon’s South Pole in some 50 days from now. The mission is expected to lead to new discoveries and enrich our knowledge systems. I wish the Chandrayaan-2 team every success #PresidentKovind

I salute @Isro scientists for making India a space super power by successfully launching #Chandrayaan2. I wish the mission a grand success.

While the current External Affairs minister Nirmala Sitharaman also extended her wishes fo the team at ISRO via Twitter.

Congratulations on #Chandrayaan2. Compliments to the entire team @isro.

Congratulations to ISRO scientists on flawless launching of #Chandrayaan2 from Sriharikota

Team ISRO scripted a new chapter in India’s space history with the launch of this ambitious and indigenous Mission to Moon.

The nation is extremely proud of its scientists and Team ISRO.

Actor Akshay Kumar extended his proud acknowledgement and congratulations in his tweet.

#ISRO has yet again accomplished a mammoth feat. Salute to the team who have spent countless days ensuring the success of #Chandrayaan2 @isro

India is said to become the first country to aspire to explore this side of the Moon, if the mission achieves its desired goal then it will help India and the World broaden the horizons of human knowledge.

Chandrayaan 1 was the first Indian lunar probe. It was launched by the Indian Space Research Organisation in October 2008 and operated until August 2009. The mission included a lunar orbiter and an impactor.

Chandrayaan 2 is an advanced version of the previous Chandrayaan 1 mission.