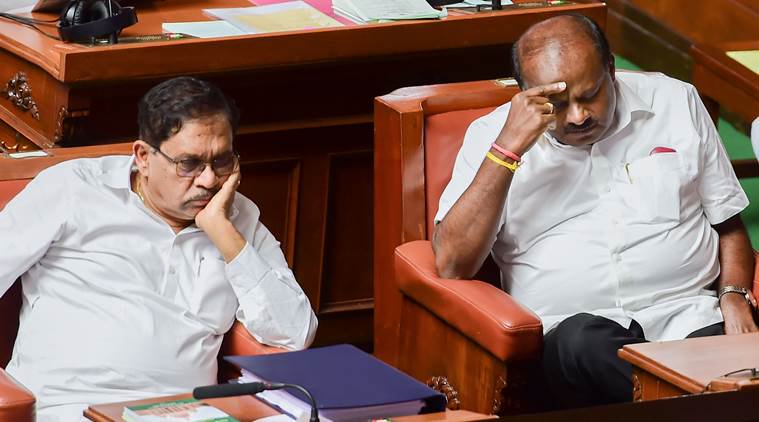 A letter, that appeared to be that of the resignation of Karnataka CM Kumaraswamy, surfaced on Monday and was circulated on social media spreading rumours of the chief minister putting down his papers.

However, terming it a “cheap level of publicity”, Kumaraswamy said the letter was fake and his signature had been forged. “I got the information that I have tendered my resignation to the governor. I don’t know who is waiting to become the CM. Someone has forged my signature and spread the same on social media. I’m shocked at the cheap level of publicity,” news agency ANI reported.

10.18 pm: Congress leader DK Shivakumar says the Speaker has served a notice to rebel MLAs, giving them time till 11 am on Tuesday, reports ANI. “BJP is trying to convince them that they won’t be disqualified & they will be made ministers,” he says. “As per Constitution of India, you can’t be made a member once you’re disqualified.”

9.53 pm: Chief Minister HD Kumaraswamy says he has got information that he has resigned, holding up a document, ANI reports. “I don’t know who is waiting to become CM,” he adds. “Someone has forged my signature and spread the same on social media. I’m shocked at the cheap level of publicity.”

9.47 pm: “Don’t push me to a point where I’ll have to take a decision without asking you,” Speaker KR Ramesh Kumar tells the House, ANI reports. “The consequences will be disastrous.”

9.44 pm: “After the Supreme Court takes a decision tomorrow, then it’ll be right to speak and debate on this issue [trust vote],” says Congress MLA HK Patil according to ANI.

8.35 pm: The Assembly session has resumed after a long break, News9 reports.

6.50 pm: MLAs continue to stay inside the Vidhana Soudha in Bengaluru even as the session has been adjourned for 10 minutes, ANI reports.