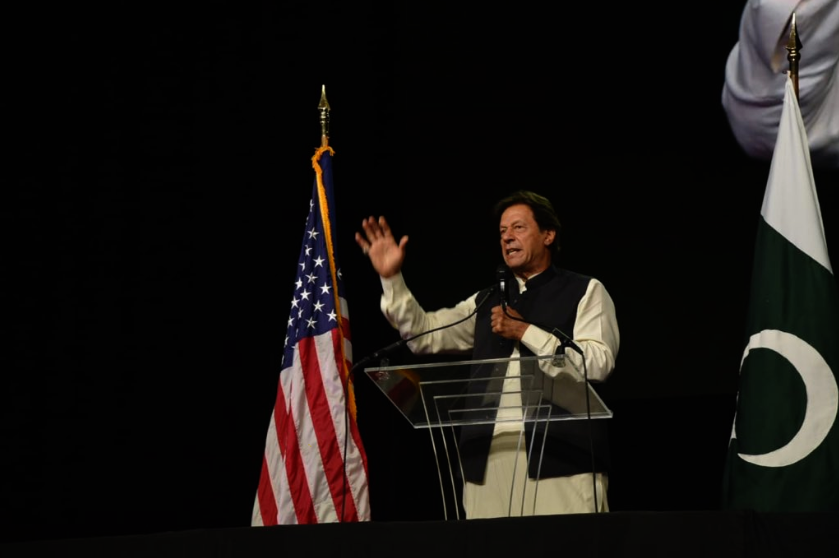 While Pakistani crowd cheered Imran Khan, the activists caused commotion in the gallery and security personnel were seen asking them to leave.

10,000 Anti-American Pakistanis converged on #CapitalOneArena in Washington DC to hear their Islamist leader ⁦@ImranKhanPTI⁩ of Pakistan. The rally was disrupted by Baloch activists chanting #USA-USA” to protest Pakistan’s occupation of Balochistan & rape of its resources. pic.twitter.com/Wr82dyC56E

ALSO READ: US gives cold shoulder to Pak PM Imran Khan as he lands in the US

The massive billboards installed on large mobile started running on the streets of Washington DC on the eve of the arrival of Pakistan Prime Minister Imran Khan.

Meanwhile, when Imran Khan reached the United States, no US official on Saturday came to receive the Pakistan prime minister at the airport.

Khan, who took commercial flight instead of a private jet to cut down expenses, was instead received by Foreign Minister Fawad Qureshi at the Dulles International Airport.

And the moment that everyone has been waiting for is here; Prime Minister Khan lands in US for a 3-day official visit upon POTUS @realDonaldTrump ‘s invitation. Foreign Minister @SMQureshiPTI who is already in US receives PM Khan. On way to Pakistan House now!

In a video shared by Pakistan Tehreek-e-Insaf (PTI) showed the Prime Minister deboarding the commercial flight and later being received by Qureshi and Pakistan ambassador to the US Asad M Khan. He also took people mover for leaving the airport. Reportedly, he was not accorded the due state protocol while he landed in America.