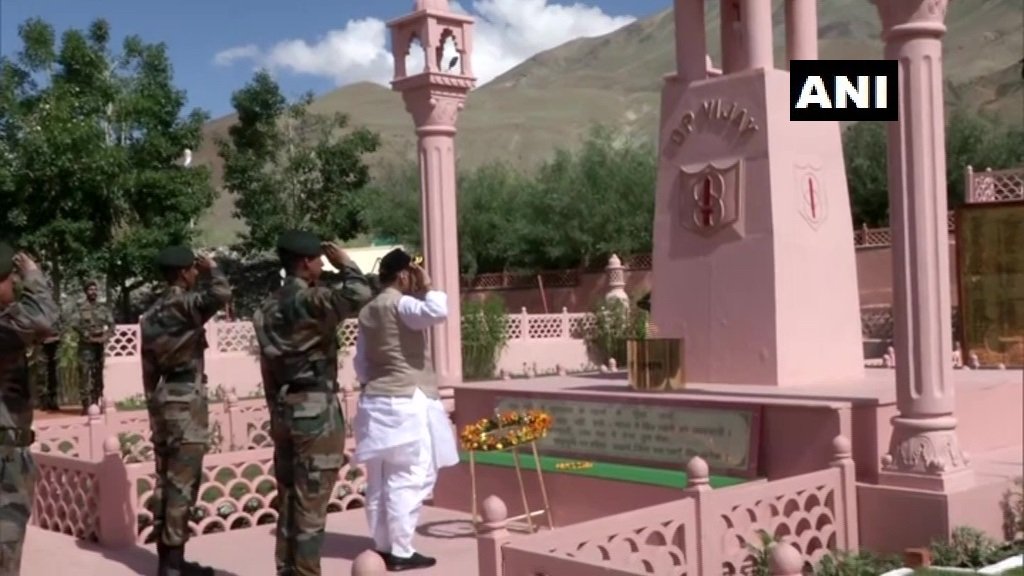 Defence Minister Rajnath Singh visited Kargil on Saturday to pay tributes to soldiers who laid down their lives in the 1999 Kargil War.  Army Chief General Bipin Rawat was also present with him

Singh’s visit comes ahead of the 20th anniversary of the Kargil War, on July 26, to commemorate India’s victory over Pakistan in the Kargil conflict.

The defence minister will also visit the Jammu region and dedicate to the nation two bridges, built by the Border Roads Organisation (BRO) at Ujh in Kathua and Basantar in Samba.

ALSO READ: Here is how you can contribute ideas for PM Modi’s Independence…

“Leaving New Delhi for Drass on a day-long visit to J&K. Shall visit the Kargil War Memorial to pay tributes to the fallen soldiers. I shall also be visiting Jammu region where two bridges built by BRO at Ujh in Kathua and Basantar in Samba will be dedicated to the nation,” tweeted Rajnath Singh.

On July 14, a ‘Victory Flame’ was lit by Singh at the National War Memorial in Delhi, which will reach Drass in Jammu and Kashmir on July 26.

The flame would traverse through 11 towns and cities and finally culminate at Drass where it will be merged with the eternal flame at the Kargil War Memorial.

This year, the 20th anniversary of the Kargil War and the milestone is being celebrated in a grand manner by the Indian Army with a view to rekindling the pride and valour of all the soldiers who took part in Operation Vijay.