The loss for India as they were knocked out of the ongoing ICC Men’s Cricket World Cup 2019 on Wednesday was felt throughout the country and Twitterverse lost its cool after former Indian captain MS Dhoni seemed to be teary-eyed after getting dismissed in the penultimate over in the semi-final against New Zealand.

The wicket-keeper batsman played a knock of 50 runs, but was unable to take his side over the line against the Kiwis.

Soon after being run out, Dhoni was visibly distraught, and this did not seem to go well with his fans.

ALSO READ: Dhoni was given the role of playing with lower order after first few matches:…

Fans of the ace cricketer, who recently turned 38, took to Twitter to appeal to their idol to keep his chin high while praising his efforts in turning tables in favour of the Men in Blue.

“#INDvsNZ, Don’t cry Legend, Wherever you will be we will always support you. Love you Dhoni, 3000 times,” one fan wrote on Twitter. 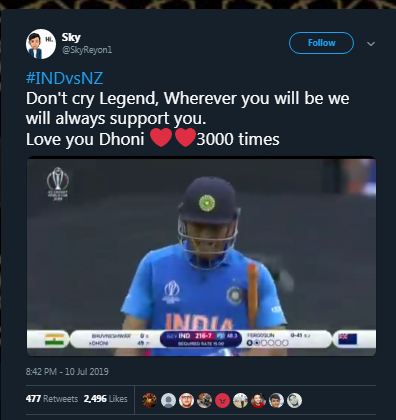 “For you cricket is not just a GAME and for us you are not just a PLAYER, you will be always in our hearts LEGEND #Dhoni,” another Twitter user wrote. 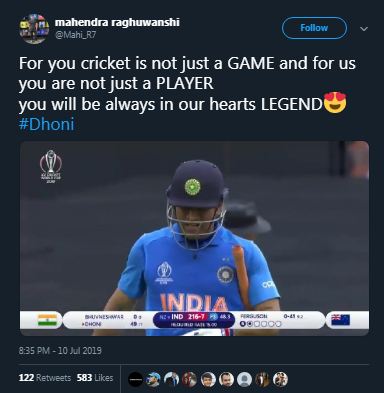 “Either we win or lose you all bashes him for no reason but he is nothing but the most humble and kind human being who loved playing for his country. he is the best Indian captain our country can ever produce, I’m sorry mahi we don’t deserve you. #Dhoni,” wrote another fan. 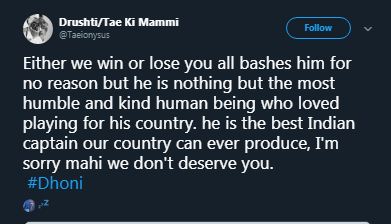 “Sorry dhoni for yours tears come out today….all 135 crores missed your captaincy today…thanks be make proud for all india…you are always inspirations of all Indians….thanku my dear captain cool,” another fan wrote. 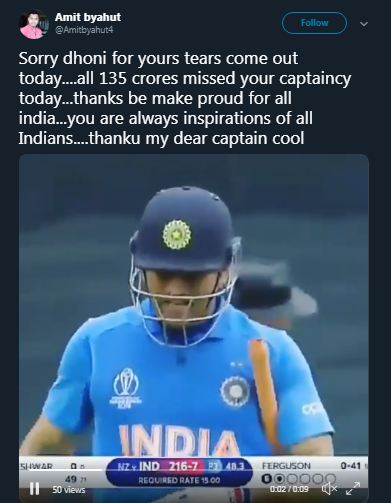 “Nobody did for Dhoni what Dhoni had done for Sachin,” one Twitter user wrote.

Dhoni has come under a lot of criticism for the slow tempo to his innings and his baffling batting approach against England was criticised by many former players.

It is being speculated that this World Cup may be Dhoni’s last and the wicket-keeper may very well call it quits after the tournament.

Virat Kohli penned down a brief but heartfelt message post the World Cup loss on his social media where he thanked the fans for their immense support which made this tournament memorable for the team. He also said that the team feels just as disappointed as the fans and they gave everything they had.

Firstly I want to thank all our fans who came in huge numbers to support the team. You made it a memorable tournament for all of us & we definitely felt the love showered upon the team. We are all disappointed & share the same emotions as you. We gave everything we had.Jai hind🇮🇳 pic.twitter.com/rFwxiUdqK5

Famous figures like PM Narendra Modi and superstar Amitabh Bachchan tweeted their emotions and support for the Indian team.

“It thunders and lightening outside .. there is much of it inside too .. suddenly every thing about looks and feels different .. there is a quietness about the town .. and one that shall remain for days ..

It comes from compassion and the joy of being one with one .. and that is what has been the achievement of our WC2019 escapade .. the ‘pluck’ shown the composure in the fear of likely embarrassing defeat, the determination and calm of a champion, despite ulterior circumstances .. all give the team a sense of belonging and togetherness ..

India WC 2019 was a ‘plucky loser’ – one that showed courage and a desire to win even in extraneous circumstances .. I prefer a ‘plucky loser’ than just a loser .. we lost yes , but we were almost winners .. and the fight to that was determined in the nature of the temperament of all ..

‘Ah well tomorrow is another day ..’ that famous quote from Scarlet O Hara in ‘Gone with the Wind’ ..”, he wrote.

In pursuit of 240, Virat Kohli, Rohit Sharma, and KL Rahul all scored just one run. This is the first time in the history of cricket that the first three batsmen of any team were dismissed for one run each.

Sharma and Rahul were dismissed by Mark Henry whereas Kohli was sent back to the pavilion by Trent Boult. Their dismissals restricted to India to 5/3. Dinesh Karthik (6) also failed to leave a mark and his dismissal pegged India back at 24/4.

Rishabh Pant and Hardik Pandya stitched together a partnership of 47 runs but their resistance ended as Pant (32) was sent back to the pavilion by Mitchell Santner. Pandya also departed after playing a knock of 32 runs as he was dismissed by Santner.

Earlier, the tail-enders dragged New Zealand to post 239 for the loss of eight against India in the first semi-final of the Cricket World Cup at Old Trafford on Wednesday.

Picking up from where they left a day after rain halted the match, New Zealand added 28 runs to the scoreboard to finish their 50-over quota.

For India, Bhuvneshwar Kumar was the pick of bowlers as he returned with three wickets in his 10 overs quota and gave away just 43 runs.