Home Home Slider Whoever handles the pressure better, will come out on top: Virat on... 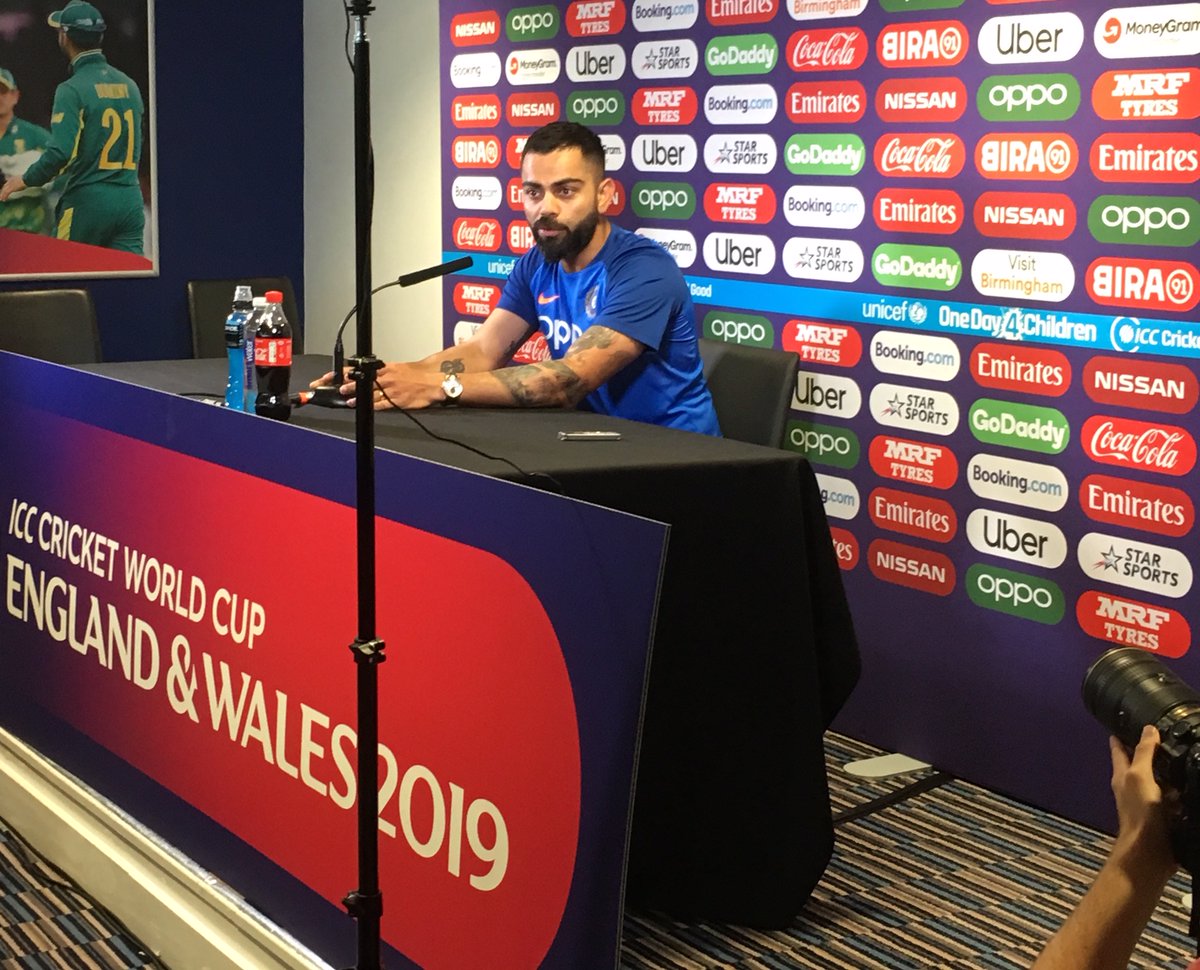 Ahead of the crucial World Cup semi-final between India and New Zealand on Tuesday, Captain Virat Kohli said whichever team is able to handle pressure stands a better chance to win.

“We understand that combination. We have made it to a lot of knock-outs and finals. It’s up to both the teams to bring their A game and whoever handles the pressure better, will be the team that’s going to come out on top. We certainly are looking forward to doing that,” he said at a pre-match press conference.

From 2008-2019
2 captains captaining their sides – Who would have thought? @imVkohli asks 😁👌 #TeamIndia pic.twitter.com/FGX8s1OOnH

When asked will the challenge be different as compared to the league matches, Kohli nodded, saying in group fixtures one can go out and try a few things, However, in the semi-finals, one needs to be precise and decision making will be crucial.

“This is more similar to the toughest situation you get in Test cricket where you have to be absolutely precise and intent cannot go down. Decision making will be crucial. Both teams are experienced enough who have played these games. New Zealand were in the finals last time. They know how to play the knock-out game. They had a wonderful World Cup and are a quality side,” the India captain said.

Reflecting on the Indian bowling attack, Kohli said his boys have shown a lot of character, especially in low-scoring matches. He said his bowlers have been up with the best in the tournament.

“Our bowling attack has been up there with the best. If not the best bowling attack in the competition, I think the way we have bowled in low-scoring games, even coming back into the match when the guys have been hit, I think we have shown a lot of character,” he said.

When asked about the bowling attack of the Kiwis, the Indian captain said New Zealand pacers are very consistent. He also praised Mitchell Santner, saying he brings in a lot of control in the middle overs.

“New Zealand bowling attack has been very balanced. Their pacers are very consistent. Mitchell Santner brings in a lot of control with his skills in the middle overs. We have to be disciplined and play very correct cricket too. Score good runs against them as they bowl in good line and lengths. It’s going to a nice battle,” he remarked.

ALSO READ: Men In Blue all set to take on Black Caps: Here’s a swot analysis

Kohli also acknowledged the contribution of MS Dhoni in the team. He heaped praises on Dhoni, saying one should acknowledge and appreciate the former captain who has done so much for the team.

“He has handled the whole team in translation. We understand what he means to us. You need to appreciate what he’s done for Indian cricket. We are very grateful for what he’s done for all of us. He’s in a very comfortable and happy space. I am really delighted to have played with him for so many years,” he said.

Kohli has not hit a single century in the ongoing World Cup so far. When asked about his role in the team, the India captain said he knows he can accelerate in the end and nobody is focusing on personal milestones.

The Indian captain also acknowledged Rohit Sharma’s contribution to the team and lauded him for recording five centuries in the tournament. Kohli further said that he has been letting players like Hardik Pandya, Kedar Jadhav, Rishabh Pant and Dhoni express themselves in the middle.

“It’s great Rohit has been scoring consistently which means that coming in the later half of the innings, you have to play a different role which is controlling the middle overs and letting guys like Hardik, Kedar and MS in the past few games now Rishabh come out and express themselves,” Kohli said.

“I have understood roles can vary depending on the time you step out to bat in one-day cricket. I know I can accelerate in the end. Personal milestone, honestly, no one ever focuses on. Rohit said the same on the other day. He is only trying to do the best for the team. In that process, special things happen. It’s an outstanding achievement, according to me at the moment he (Rohit) is the best player in the ODI,” he added.

When asked about the promotion of K L Rahul to opening the innings along with Rohit, Kohli said Rahul took time to settle in initially as it is his first World Cup but he is playing an important role.

“K L (is) playing an important role. He took time to start in initial games as it’s his first WC. (He is now) getting more comfortable in his role. From Team point of view, he is giving good starts,” Kohli said.

Moreover, Kohli also said that five bowlers give India enough depth in the batting. However, he is open to discussion.

Both Kohli and New Zealand captain Kane Williamson led their sides during the U19 World Cup semi-final in 2008 when India defeated the Kiwis by three wickets.

Reflecting on the similarities more than a decade later, Kohli said, “When we meet tomorrow, I’ll remind him. It’s quite a nice thing to realise that 11 years after, we are captaining our respective nations again in a senior World Cup from U19. We both will feel good about it knowing this will be happening. Neither of us could have anticipated this.