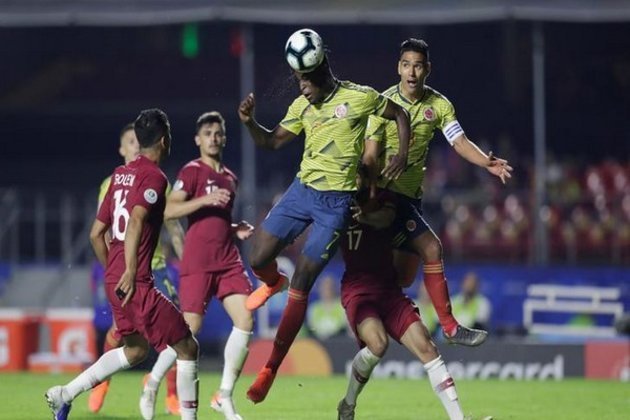 Colombia in their second match of group B defeated Qatar 1-0 on Thursday here at Morumbi stadium. Colombia with a win over Qatar, sealed a spot in quarter-final of the Copa America as they won their both games.

For Colombia, Radamel Falcao started on the bench and James Rodriguez’s impact was limited, at least until the latter set up the winner with a sublime pass.

In the final minutes of the game, Duvan Zapata’s header came as a lifeline for Colombia as they were not able to score before that. Zapata headed the ball to the goal in the 86th minute, the only goal in the match. Interestingly Zapata scored two goals in the tournament so far and both come in the 86th minute.

The 55th FIFA ranked Qatar showcased a quality game as they appeared organised in every department. Qatar did not allow their opponent to score freely as they kept their defence solid.

Although Colombia attacked Qatar’s goal-post but could not end with a goal. The score-line after the completion of full time ended with 1-0 in favour of Colombia.

In their opening match, Qatar played a draw against Paraguay while Colombia outclassed Argentina in their first game.

Colombia will next play against Paraguay while Qatar will take on Argentina on June 26.