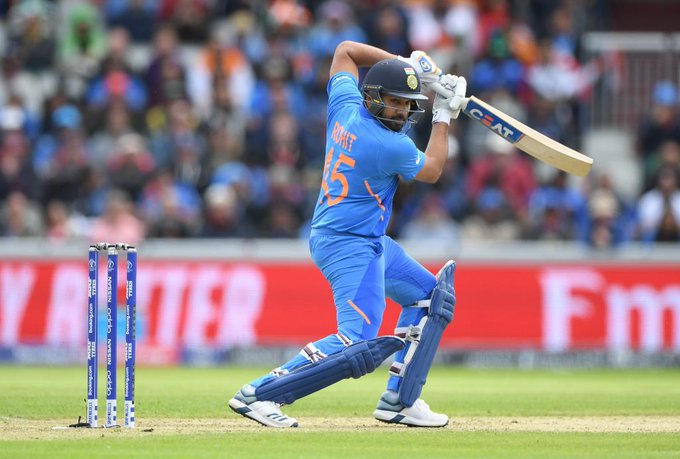 As India faces Pakistan in what can be termed as the biggest rivalry in world sports, the Indian side has currently scored 305/4 in 46.4 overs, after the covers came off in the match, which was halted for a short while due to rain.

The gripping match which takes place at Old Trafford, Manchester, saw Rohit Sharma complete a century in 85 balls against Pakistan.

This calls for remembering some of the best knocks by Sharma-

In the absence of Virat Kohli, Rohit Sharma led India in the 2018 Asia Cup. The expectations were high for this super four clash and everyone expected Pakistan to put up a strong performance after being absolutely thrashed by India in the group stage.

Pakistan batted first and put up a fighting total of 238 for India. India had a tricky chase ahead of them due to the deteriorating, dry wicket and a full strength Pakistan bowling line-up boasting of Mohammad Amir, Shadab Khan and Hassan Ali.

Rohit scored a brilliant 111* off 119 balls with the help of 7 fours and 4 sixes en-route taking India into the finals with a resounding nine-wicket victory with more than 10 overs to spare. Eventually, he led India to the Asia Cup triumph and finished as the highest run-scorer of the tournament at a whopping average of 105.

India was absolutely annihilated in the first ODI in Dharamshala and a strong response became essential. Rohit decided to bat first on a flat Mohali wicket after winning the toss.

This was a typical Rohit Sharma innings where he batted cautiously in the first half of the innings, gathered some momentum midway and went absolutely bonkers in the final overs. He brought up his third ODI double ton with the help of 13 fours and 12 sixes out of which 10 sixes came in the final six overs.

The highlight of the inning was the fact that Sharma took 115 balls to score his 100 and then shifted gears immediately as he brought up his 200 from just 38 more balls as the Sri Lankan bowlers were left scratching their heads for answers to stop the onslaught.

There comes a phase in every batsmen’s career when they enter the best phase of their career. For Rohit Sharma, the Australia series in 2016 could well have been his best. He scored 441 runs in 5 innings at an average of 110 in that series. He looked absolutely unstoppable in the series as he scored 2 centuries and one 99.

On a pacy pitch, Rohit Sharma was pulling off the front-foot as if the game was being played in slow motion for him. He batted through the innings and hit 13 boundaries and 7 sixes.

The aura of this man has been such built that everyone was surprised as Rohit didn’t score a double-ton. However, stats don’t tell the whole story because the WACA wicket was one of the most difficult pitches to bat on because of the express pace and bounce and playing the whole innings on such wicket required world-class level competence.

India had made its way to the World Cup quarter-finals but was struggling at 115-3 after 28 overs against Bangladesh. Suesh Raina joined Sharma and the duo put together India’s most crucial partnership of the tournament by adding 122 runs in 15 overs.

Rohit fought his way to his 7th ODI century under a pretty tough situation and against fully pumped-up spirited Bangladeshi team. They gave their absolute best in the field and made India work hard for every single run in their innings. India needed someone to bat through the innings and lead them to a decent total. Rohit took the responsibility and helped India reach 302, that sufficed as Bangladesh fell way short and India grabbed a place in the final four of the World Cup.

Rohit Sharma broke numerous batting records en-route this incredible inning. He battered, bruised and absolutely dismantled the Sri Lankan bowling line-up. This was one of the craziest and wonderful displays of hitting one could see.

Rohit was slow off the blocks in the beginning as he reached his fifty off 72 balls. Little did anyone knew what was to follow as Rohit briskly got into the full rhythm and absolutely shattered the record books.

He scored the 2nd highest first-class score and the highest ODI score of all time. He was dismissed on the very last ball of the innings but up until then, he smashed 33 fours and nine sixes to reach the score of 264. He finished with the most number of boundaries by an individual in an innings and became the first international cricketer ever to score 250 in ODI cricket.

This has to be one of the most special innings of Rohit Sharma’s career for various reasons. Sharma was not scoring too many runs at number four but repeated failures of Rahane at the top of the order resulted in Dhoni’s experimentation of sending Rohit to open the innings for the first time in his entire first-class career.

Batting at the top for the first time, Sharma scored a match-winning 83 and helped India to take an unassailable 3-1 lead in the series. He played the commanding role for the most part that innings and took India to a comfortable position from where Dhoni and Raina easily finished off the game and the series.

Australia set a daunting 360 run target for India in the second ODI of the seven-match series. Rohit and Dhawan added 176 runs for the first wicket and then Virat Kohli joined Rohit as the duo absolutely destroyed the Australian bowling.

Rohit Sharma played his natural attacking game throughout the innings and showed the world what he truly is capable of. He scored 17 boundaries and four sixes in this marauding knock and took India home with 9 wickets and 6 overs to spare.

This innings, in a true sense, solidified Rohit as the white ball cricket opener of India for the upcoming years.

India won the toss and decided to bat first on a typical Chinnaswamy wicket. The pressure was huge as it was the series decider and an opportunity for India to win their first ever seven-match ODI series.

As usual, Rohit took his time and scored his fifty of 70 balls. Once he got his eye in, he started to pick up the pace and unleashed in the last eight overs.

He reached his maiden ODI double century in the penultimate over of the innings with a six over the covers from a Clint McKay delivery as he brought up his second hundred in just 42 deliveries.

India had to chase down 240 to get one step closer to create history down under. It was the first of the best of three finals of the CB series against Australia. India had a disastrous World Cup of 2007 and this was the perfect opportunity to diminish the haunting memories of that.

India was in some trouble at 87-3 when Rohit Sharma joined Sachin at the crease. One more wicket at that stage would have resulted in deep crisis for India. Both batsmen played beautifully, yet cautiously and stitched together a match-winning 123-run partnership.

Rohit fought fire with fire and showed his temperament to the whole world. He played a fearless inning of 66 with the help of six boundaries and ensured India the victory. This was the innings that gave Rohit Sharma the impetus for the rest of his career.

India went on to win on to win the CB series in the next game and Rohit played a crucial role in the triumph by scoring 235 runs in the series at an average of 33.