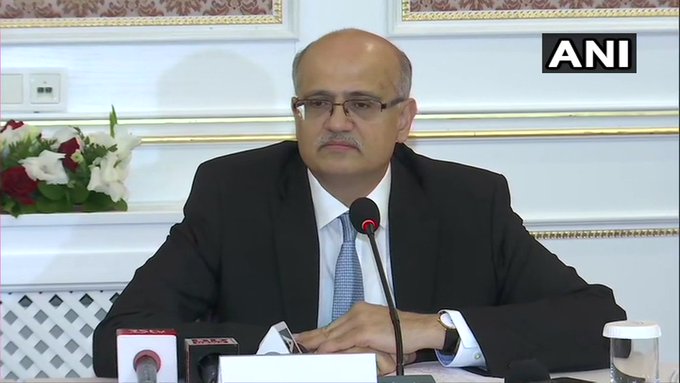 India, Russia and China will hold a trilateral meeting on the sidelines of the G-20 Summit in Osaka in Japan later this month.

This was disclosed after a meeting between Prime Minister Narendra Modi and Russian President Vladimir Putin on the sidelines of the Shanghai Cooperation Organisation (SCO) meeting.

“It is planned that there will be a Russia, India and China trilateral meeting on the sidelines of the G-20 Summit in Osaka, Japan,” Foreign Secretary Vijay Gokhale told the media while briefing on the meeting between Modi and Putin.

Ever since G20 was formed, India has been actively participating in the meetings. Although there are no binding commitments in G20, it sets the agenda for multilateral trade relations. The G20 members represent two-thirds of the world’s people and 85 per cent of its economy.

Gokhale also said that Modi will visit Russia in early September as the main guest at the Eastern Economic Forum to which he was formally invited by Putin.

Russia has also activated the first batch of orders of AK-203 Kalashnikov rifles, he said.

“Naturally, discussions took place on defence related issues. Prime Minister thanked President Putin for the rapidity with which Russia had responded to our request for Make in India to manufacture the AK-203 Kalashnikov rifles in Amethi. This is a project which was set up in record time and President Putin infact confirmed that the first batch of orders was already activated. Both leaders were very pleased with it. In a sense, this marks the beginning of the process where we will move away from the buyer, seller relationship to one way that is technology transfer and Make in India, job creation and content creation in India,” he said.

It was during his official visit to India last October that Putin and Modi reached an agreement on producing Kalashnikov assault rifles’ 200 series in India.

On 3 March, Modi launched an AK-203 rifle manufacturing unit in Amethi as part of the Indo-Russia Rifles Pvt Ltd – a joint venture between India’s Ordnance factory and a Russian firm.

“One of the areas President Putin particularly mentioned was the modernisation of Indian Railways. In this regard, they are doing a study for the upgrading of the Nagpur-Secundrabad line and this was the area in which Russia is interested in.

During his meeting with Putin, Modi said, “I am obliged with the highest respect order of St Andrew the Apostle, on behalf of people of India. I am very grateful for your support for the rifle manufacturing unit in Amethi. We will meet in (G-20 summit) coming days in Japan.