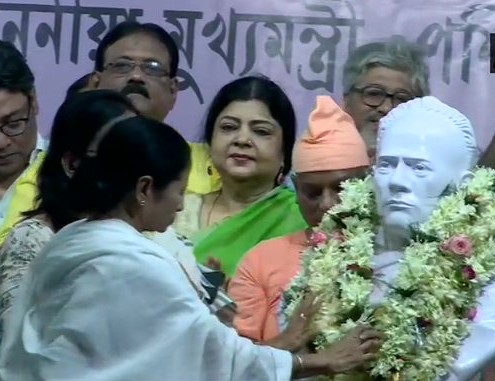 West Bengal Chief Minister Mamata Banerjee on Tuesday unveiled a bust of social reformer Ishwar Chandra Vidyasagar at the Hare School ground in Kolkata, days after a similar bust was vandalised in clashes between BJP and TMC workers at Vidyasagar College in May this year.

Several ministers in the West Bengal government along with Trinamool Congress leaders and some spiritual leaders attended the event to mark the unveiling of Vidyasagar’s bust.

Kolkata: West Bengal CM @MamataOfficial garlands the bust of Ishwar Chandra Vidyasagar at a ceremonial programme at the Hare School ground in College Street. Later in the day the bust will be re-installed at Vidyasagar College. pic.twitter.com/Bja0lEpzhd

Later in the day, the bust will be re-installed at Vidyasagar College, where the same place where a similar statue was broken last month during a political clash.

Moreover, the TMC chief will march to Vidyasagar College to participate in the re-installation event of the bust.

The bust of Vidyasagar, a 19th-century social reformer, was vandalised in clashes between BJP and TMC workers at Vidyasagar College during BJP president Amit Shah’s roadshow on May 14.

Prime Minister Narendra Modi had on May 16, promised to build a grand ‘panch dhatu’ (traditional five-metal alloys of sacred significance) statue of Vidyasagar at the same spot where the old one stood before being vandalised. Banerjee, however, publically denied the proposal by asserting that her state has got enough money to make the structure.

Vidyasagar, who has brought great reforms in the Indian society, is often touted as a man who was ahead of his time. Mostly recalled for his contribution in introducing concepts of widow-remarriage in the traditional society, he is referred to as a philosopher, writer, reformer, printer, and philanthropist.