Theresa May says she will give lawmakers a chance to vote on holding new Brexit referendum | Newsmobile
Saturday, October 1, 2022

Home Home Slider Theresa May says she will give lawmakers a chance to vote on... 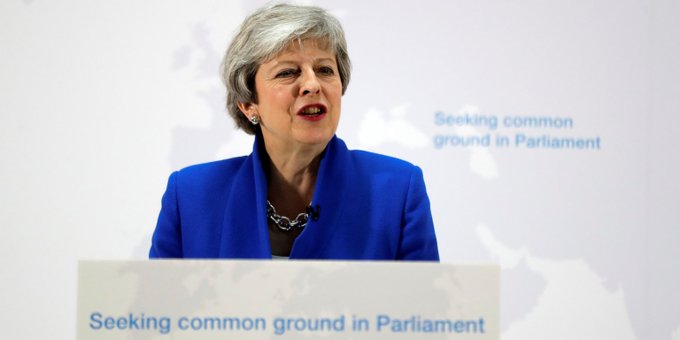 UK Prime Minister Theresa May on Tuesday gave a chance to those in the Parliament asking for a second referendum on Brexit to have their way by introducing a new Brexit deal, even as she maintained her stand against the move.

“I’ve tried everything possible to find a way through,” May said during a presser. The British leader’s previously negotiated Withdrawal Agreement was rejected thrice by the UK Parliament.

“Today I am making a serious offer to MPs across Parliament – a new Brexit deal,” she added.

The latest proposal is being viewed as a last-ditch effort by the PM to gather support for a deal on the lines of which, the UK will exit the European Union by October this year.

The MPs supporting a second referendum would still need to pass the new deal in order to have their way, as per the British leader.

The British Prime Minister, however, emphasised that the Parliament needed to pass the Brexit deal in order to hold the second referendum.

“And if the House of Commons were to vote for a referendum, it would be requiring the government to make provisions for such a referendum, including legislation if it wanted to ratify the withdrawal agreement,” May stated.

“So, to those MPs who want a second referendum…you need a deal and therefore withdrawal agreement bill to make it happen, so let it have its second reading and then make your case to parliament,” she outlined.

Even though she gave the MPs this option, she stood steadfast in her belief on delivering the outcome of the first referendum and exiting from the European Union by October 31, 2019.

She added that the new proposal makes a 10-point deal to everyone in the British Parliament who wants to exit the EU. The points cover topics like customs, trade, environment amongst others.

This new Brexit deal will be submitted before the Parliament early next month.

In her new deal, May also tried to take on the concerns regarding the Irish backstop, which were raised when the previous Withdrawal Agreement was debated in the Parliament.

“As part of the new Brexit deal, we will place the government under a legal obligation to seek to conclude alternative arrangements by December 2020, so that we can avoid any need for the backstop coming into force,” she said.