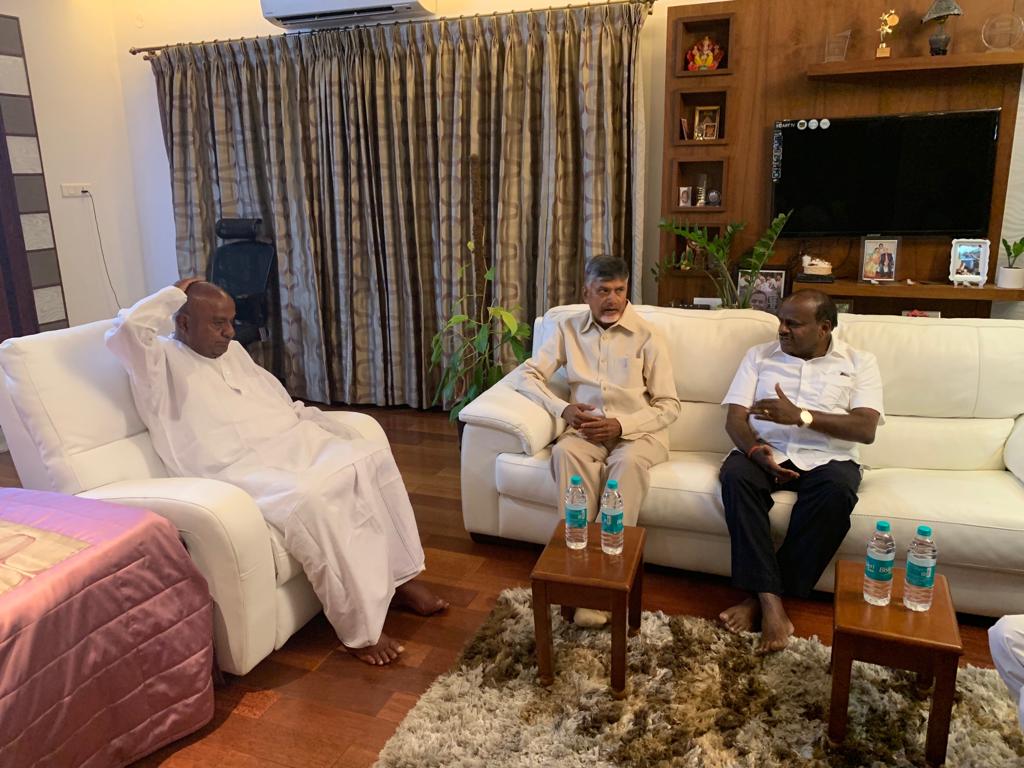 Talking to media persons after their meeting, TDP president said that he, along with leaders of 22 major opposition parties, had moved the Election Commission and demanded that the VVPAT of an entire assembly segment be counted even if one of the five samples does not match the EVM.

“The delegation also handed over a memorandum to the Commission. We also demanded that the EVM-VVPAT tally should be done at the beginning of the process of counting,” he said.

“Election Commission will conduct a meeting tomorrow (May 22) with all the 23 political parties to discuss the issue. Even former Chief Election Commissioner backed our demands and condemned the replacement of EVMs in Uttar Pradesh,” Naidu added.

Endorsing Naidu’s remarks, Deve Gowda said: “Naidu raised the issues of the faulty EVMs in and was of the suggestion that we should go back to the paper ballot to avoid these complications. We stand by him. We had also sent our representative to Delhi to raise the demand.”

Attacking PM Modi over the issue, Naidu questioned, “If Prime Minister Narendra Modi spent 9,000 crore on the voter verified paper audit trail (VVPAT), then why is he not counting them for accountability and transparency.”

The two leaders, however, claimed that they did not discuss issues related to the formation of a coalition government.

His comments came against the backdrop of 23 opposition parties knocking the doors of the Election Commission, pressing their demand of tallying VVPAT slips with EVM figures in an entire Assembly constituency, in case a discrepancy is found in any polling booth.

This demand came after several opposition parties complained of attempts to replace EVMs from strongrooms after the end of polling in some constituencies in Uttar Pradesh. The EC, however, rubbished such reports, terming them as “absolutely false”.

On May 18, Naidu had urged the Election Commission to use VVPAT instead of EVMs to count votes polled in the Lok Sabha elections.

On May 7, the Supreme Court had turned down a review plea filed by 21 opposition parties seeking a direction to the EC to increase random physical verification of VVPAT from five to at least 50 per cent of EVMs.

The counting of votes will take place on May 23.