De De Pyaar De is an emotion based romantic comedy, aptly described by the makers, that revolves around a 50 year old man falling for a girl half his age.

I am sure curiosities were piqued with the trailers. And let me tell you the film delivers much more than that peek.

The interesting plot, the balanced treatment with perfect dose of comedy and emotions and most importantly, the wonderful cast makes it a perfect watch. 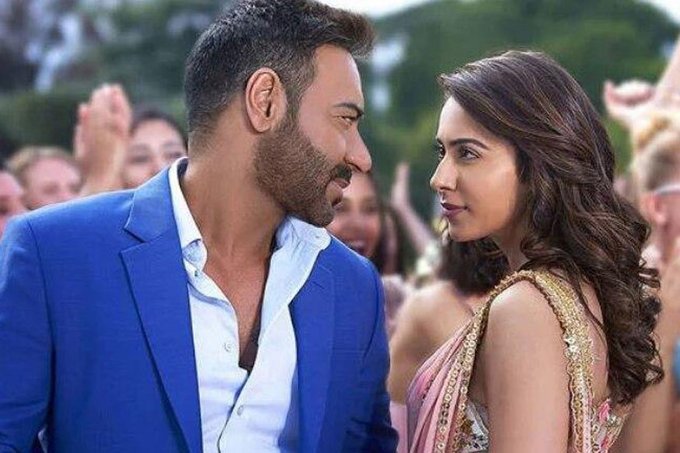 The first half concentrates on the love angle.There are ample doses of humour and the romance has been handled in a light hearted breezy way.

The best part is none of the two behave in an overtly romantic or mushy way. The banters, the sarcastic remarks about the age difference and mutually beneficial relationship, keep it practical, real and light.

After an initial reluctance to commitment by Ajay, they eventually decide to go forward with the relationship and decide to meet Ajay’s family in India.

And that’s when the tempo and the fun accelerates.

Ajay’s family comprises of his father (Alok Nath), mother ( Madhumati Kapoor) , 2 young kids , one older and one younger than his girlfriend and his wife( Tabu).

The second half initially gives us some (tad exaggerated) hilarious situations, good humoured dialogues, and then a good dose of emotions and a practical take at such complicated relationships.

I liked the fact that the makers refused to go for a cliched climax and opted for a more modern take at relationships that some might find impractical. Acceptance, being the mantra these days, has been emphasised upon wrapped up in a breezy , light hearted package.

The film is debutant direction of Akiv Ali who is well established editor with an impressive filmography ( Dirty Picture, Pyar ka Punchnaama etc) and he’s done a pretty good job at it.

I think it was a great amalgamation of writing, direction and some wonderful performances thrown in by a perfect cast.

ALSO READ: In pictures: Red carpet looks of Priyanka, Kangana and Deepika on…

Would want to begin with Tabu, who makes an entry almost in second half but steals your breath away.The seasoned actress she is, the most subtle of expressions on her face or in eyes are a pleasure to watch. Her comic timing and work camaraderie with Ajay translates into a wonderful chemistry onscreen.

She gives a stellar performance with a bonus of few wonderful emotional scenes.

Ajay, looks amazing as the raw braw macho with a perfect level of maturity. He plays the character to perfection,no impractical romantic antics, refusing to swoon over the young attractive girl, being uncomfortable with PDAs and his pain and confusion over the inability to deal with the complications. His humour, his sex appeal and emotional side are well portrayed.

Rakul is the surprise package I must say. She not only looks hot, fit and great but plays the nuances of the character with an amazing ease. Either she has matured as an actor or we weren’t able to notice her in her forgettable roles after her debut, but she gives the right balance of playfulness and emotions.

Javed Jaffrey and Jimmy Shergill add zing in their small roles. But I would rather say Jimmy was wasted .

Music was a fair mix of some emotional , romantic and groovy numbers. ‘Waddi Sharaban’ and the ‘Mukhda Vekh Ke’ are peppy.

I would highly recommend the movie. It’s a fun watch and performance add a big reason. And like an icing on the cake, all three look deliciously great.