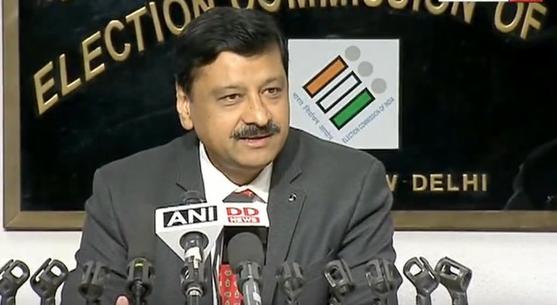 The fifth phase of the Lok Sabha elections 2019 took place on Monday and an estimated 62.56% electorates exercised their franchise in 51 constituencies across seven states.

Briefing reporters, Deputy Election Commissioner Sandeep Saxena said, “In the entire phase five, for corresponding constituencies in 2014 the turnout was 61.75% and for today’s poll the turnout is 62.56%, as last reported.”

Sharing state-specific voter turnout, he said, “Today in Rajasthan polling was done in 12 parliamentary constituencies. The turnout at 6 PM is 63.75%, with polling still ongoing at some places. It is nearly 2% more than the last time for the corresponding constituencies.”

“In Jammu and Kashmir’s Shopian and Pulwama district, today’s total turnout is 2.81%. In Anantnag parliamentary constituency, the 8.76% is the voter turnout for all phases combined. Two incidents were reported today from the state. A grenade blast was reported in the morning where a polling station was set up and in the afternoon another grenade was hurled at another polling booth but it did not explode. There were no injuries. In Ladakh constituency, total turnout as of 5 PM was 61.56%. During 2014 it was 71.9%”, he added.

Incidents of violence, marked by clashes between BJP and TMC workers in West Bengal and two grenade attacks in Anantnag constituency in Jammu and Kashmir were reported while polling was by and large peaceful in the other states.

Deputy Election Commissioner, Chandra Bhushan Kumar briefed about polling in Bihar and Uttar Pradesh and said, “In Bihar 82 candidates were in the fray for five parliamentary constituencies that went to polls today. As of 6 PM, 57.86 % polling is recorded in these five constituencies which are more than 2014 figure of 55.69 %. As of now, elections have concluded in 24 constituencies of Bihar.”

“In UP, 14 parliamentary constituencies went to polls which had 182 candidates in the fray. Voting percentage till 6 PM in all these constituencies is 57.33 %. Polling has been completed in 53 constituencies of the state”, he added.

This phase is important for BJP in UP since it had won 12 out of the 14 seats in the 2014 general elections. The party faced a combined challenge from SP, BSP, and RLD, which had contested separately last time.