A post with a picture of the former President of the United States, Barack Obama, has gone viral on social media and it claims that after leaving the presidency, he is doing a private job. 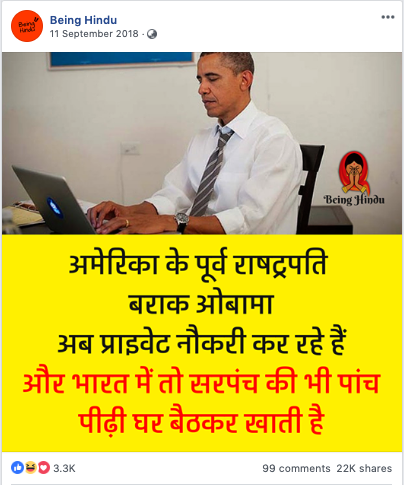 At the time of filing this report, the above post was shared by over 22,000 users on Facebook. It was widely shared by several others.

ALSO READ: This tunnel is not from J&K; here’s the fact check

NewsMobile fact-checked the above claim and found some facts.

Firstly, the picture of Barack Obama is from the time when he was serving as the US President.

On putting the picture through Reverse Image Search, we found the tweet on Barack Obama’s official Twitter handle which was dated back to 30th August 2012.

In the tweet, Obama had posted the same picture while he was the President of the United States at that time.

What exactly Obama is doing post-presidency?

After handing over the Oval Office to Donald Trump in January 2017, Barack Obama and his wife Michelle Obama have engaged themselves in various welfare projects.

Meanwhile, the couple also has a multi-year agreement with Netflix to produce films and series for Netflix.

In addition, according to a report, Barack and Michelle Obama have also inked a multi-million dollar book deal with Penguin Random House for two books.

Hence, the viral claim is not true.