The woman in this viral picture is not RaGa’s wife; here’s the truth | Newsmobile
Friday, July 1, 2022

Home Home Slider The woman in this viral picture is not RaGa’s wife; here’s the...
ShareTweetGoogleWhatsappPrint
Mail

A picture of Congress President Rahul Gandhi is making rounds on social media in which he is clicked with a woman and claims are being made that she is his wife and the couple has two kids.

ALSO READ: Did Donald Trump come to the airport to receive PM Modi?…

At the time of filing this report, the above post was shared by over 20,000 users on Facebook. Several others shared the same post on social media. 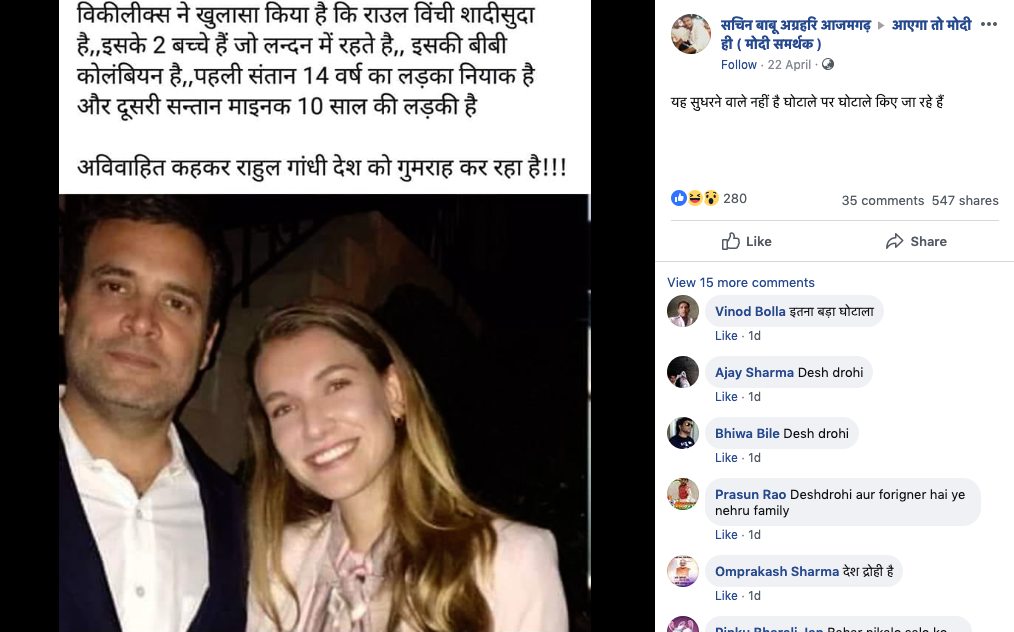 NewsMobile fact-checked the viral post and found that claims made were FAKE.

When we put the picture through reverse image search, we discovered that the woman in the picture is Nathalia Ramos who is a Spanish-American actress.

Last night with the eloquent and insightful Rahul Gandhi….. pic.twitter.com/3w27FBb0Pa

Ramos posted the same picture on her official Twitter handle on September 14, 2017.

She wrote, “Last night with the eloquent and insightful Rahul Gandhi….”

The picture was clicked during one of the events Rahul Gandhi took part during his two-week US visit starting from September 11, 2017.

Next day, on September 15, 2017, she posted the same picture on her verified Instagram as well.

Last night with the eloquent and insightful @rahulgandhi. I feel so blessed to have the opportunity to meet and listen to so many brilliant thinkers from all parts and perspectives of the world. It is only with an open mind and open heart that we can really make the world a better place. Thank you @berggrueninst for opening mine. #IdeasMatter

Hence, this proves that the viral claim is FAKE.