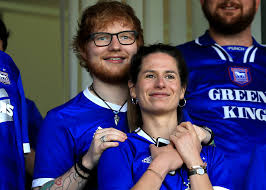 Pop star Ed Sheeran has been ordered to remove a huge private pub sign which he dedicated to his new wife in the grounds of his £1.5million mansion along with a sauna beside his ‘wildlife pond’.

The 28-year-old famous musician was ordered to take down the ‘unauthorised signage’  which he named The Lancaster Lock after his wife, Cherry Lancaster Seaborn. He married his childhood sweetheart last year and the council officials told him he needed permission.

Local people raised complaints about his new £500,000 ‘pond’ which features a jetty. With no authority given, he was asked to remove the signage and pool.

Sheeran was granted planning permission to build a wildlife pond in the grounds of his estate last year. But the building of jetty and steps that were added later have been questioned by the authorities.