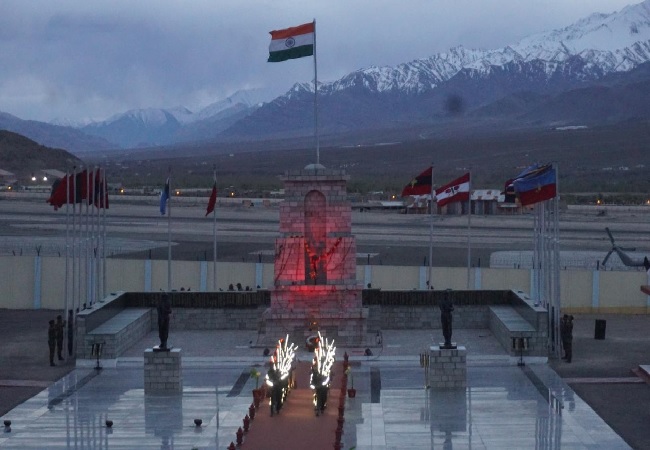 As 2019 marks 20 years of Kargil war, the Indian Army on Saturday held ‘beating the retreat’ ceremony at the Hall of Fame in Leh as a mark of respect to those who lost their lives in the war.

Lt Gen YK Joshi, General Officer Commanding “Fire and Fury” Corps was the chief guest of the ceremony which saw a number of civil and military dignitaries of Ladakh region in attendance.

The event commenced with the ‘Beating the Retreat Ceremony’ by the Ceremonial Guard followed by a Vibrant Pipe and Brass Band Fusion display. The event was also witnessed by the local populace with enthusiasm and that provided for an excellent opportunity to strengthen the bond between the locals and the Army.

The Hall of Fame at Leh was established in 1986 to showcase the valour, sacrifice and achievements of the Indian Army during various operations in Ladakh, in addition to displaying the culture and heritage of the region.

Over the past three decades, the memorial has become a major attraction for domestic and foreign tourists alike.

In May-July 1999, an armed conflict between India and Pakistan took place in the Kargil district of Jammu and Kashmir and elsewhere along the Line of Control (LoC).

India launched ‘Operation Vijay’ to clear the Kargil sector of infiltration by the Pakistani soldiers and Kashmiri terrorists. The war ended on July 26, 1999, and since then the day is observed annually in honour of the Kargil war heroes.