Veteran actor Prakash Raj on Wednesday hit out at the Congress for posting photographs on social media platforms, which claimed he backed the grand old party.

Taking to Twitter, he shared a video and wrote, “FAKE NEWS by CONGRESS.. look at the dirty politics of this party. SHAME ON CONGRESS.. HAVE SENT THE COMPLAINT TO ELECTION COMMISSION WITH PROOF ..please spread and share to counter DIRTY POLITICS.”

FAKE NEWS by CONGRESS.. look at the dirty politics of this party. SHAME ON CONGRESS.. HAVE SENT THE COMPLAINT TO ELECTION COMMISSION WITH PROOF ..please spread and share to counter DIRTY POLITICS pic.twitter.com/4hjAibE2vg

The photograph of a shake-hand between Raj and Ahmed had gone viral on social media platforms, which was captioned as ‘Prakash Raj supports Congress. Don’t waste your vote by giving it to Prakash Raj.

Here is the picture: 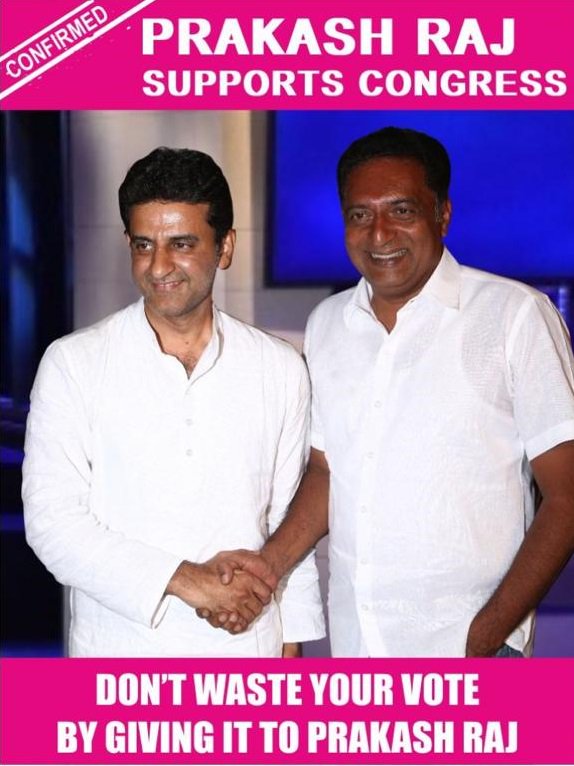 “There was a candidate debate and I met Congress candidate (from Bengaluru Central) Rizwan Ahmed. Congress has made a photograph of it (him shaking hands with Ahmed), sent it on WhatsApp groups and said it’s confirmed that Prakash Raj has joined Congress so you don’t have to waste your vote on him. It was done by Mazhar Ahmed who claims to be Rizwan’s PA,” Raj told news agency ANI.

He also filed a complaint with the Election Commission against Mazhar Ahmed.

Bangalore Central Independent candidate Prakash Raj files complaint with Election Commission against one Mazhar for spreading fake news through a picture that Raj joined Congress; says, “there was a candidate debate where I met Congress candidate Rizwan & shook hands with him”. pic.twitter.com/nHeIVFIIzR

The 54-year-old actor is contesting from Bengaluru Central seat as an independent candidate in the Lok Sabha elections. Raj said he telephoned and slammed the lack of ethics of the person, who made the ‘sick’ claim that the photos were a forward.

Polling in Bengaluru Central Lok Sabha seat will be held in the second phase on April 18. Results will be declared on May 23.