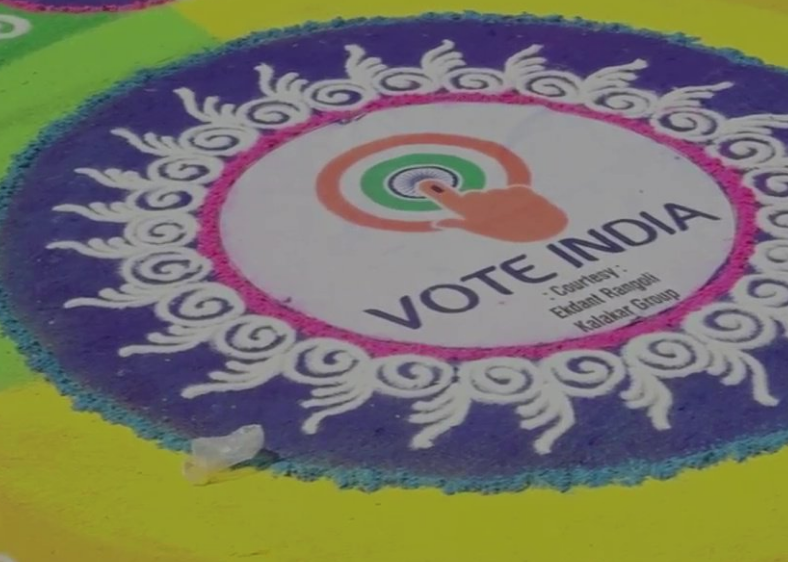 The Lok Sabha polls are just around the corner and the Election Commission of India along with citizen groups, are putting in the efforts to encourage people to cast their votes.

Vadodara-based Bharat Mata Shri Maharudra Hanuman Sansthan organised a rangoli making event to encourage city voters to cast their votes in the national elections in Gujarat. The rangolis with slogans like “My vote, my voice”, “vote India”, “vote 2019”, “Elections 2019 vote India” written on it were made by an artisan group.

Brajesh Kumar, the organiser of the event, informed that around 15 rangolis were displayed at around 2,000 square feet area in the temple. “We have collaborated with artists of Ekdant Rangoli Group for this event in our efforts to encourage people to cast their votes in this election,” he said.

In Jammu and Kashmir, a Systematic Voters Education and Electoral Participation (SVEEP) train, commissioned by the election commission, which aimed at motivating people to exercise their voting rights in the upcoming Lok Sabha election reached Udhampur on Monday. The train which not only ferries passengers but also spread awareness to vote was received by district officials on Udhampur railway here.

ALSO READ: Order asking for ban on TikTok challenged in

A special signature campaign by the Election Commission was also started at the occasion to make people aware of their rights.

The train which came from Kanyakumari was flagged off by district election officer Piyush Singla to Katra railway station.

Deputy district election officer Kusum Chib said, “We have recorded special audio appealing voters to cast their votes on April 18 which are being played at the railway station. We have also installed a Voter-verified paper audit trail (VVPAT) machine to demonstrate people how it works.”

Meanwhile, security personnel, polling officials, Electronic Voting Machines and VVPATs started arriving in Churachandpur district headquarters of southern Manipur for the first phase of polls on Monday. The officials started moving at their respective polling stations located at far-flung polling areas days ahead of the polling day on April 11.